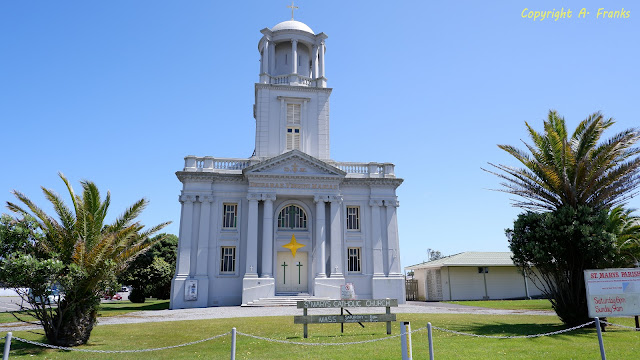 In Hokitika is this beauty of a church named St Mary's Catholic Church, why it's so grand and ornate who knows? This caught our eyes last week on the first day of our holiday. In 1912 the parish building committee agreed to call for tenders for a new church so a Greymouth architect named John Thomas Watson prepared a concept design in Roman or neoclassical architecture.

Alfred Luttrell won the tender and although he was guided by Watson's work, he introduced significantly different aspects. The previous 1866 church was demolished in February 1914 and Bishop John Grimes laid the foundation stone a month later. Owing to the outbreak of WW1 and funding difficulties it wasn't until 1920-21 that the portico and tower were added. The church was built of double brick but in 1927-28 the plaster was finally applied and the building achieved it's final appearance.

In 2004 the church was registered with the Historical Places Trust but unfortunately following a structural assesment triggered by the Christchurch earthquakes in 2011 the church was closed to the public in 2012.

It looks a beautiful church but sad that the earthquake has damaged its structure.

It's a beautiful church. At I first thought it was an administration building of some kind. I remembering hearing about the earthquake back then. I wonder if they will fix the structural issues so people can go back in.

It certainly is a most beautiful church.

it reminds me of some of the old mission churches out in california especially with the tropical greenery, wishing we had some of that right now :))

...I have seen many lovely small churches in New Zealand, but this larger one is a beauty. Thanks Amy for sharing, take care.

It's a beautiful church.
Thank you for sharing at https://image-in-ing.blogspot.com/2022/01/seen-on-blue-ridge-parkway.html

Wow, what an interesting church. I like it. Too bad it has closed to the public. Maybe they will fix the issues so it can open again.

Possibly in the era that it was commissioned, Greymouth was still wealthy on gold and coal.

Sorry - I meant Hokitika, confused myself with the home of the architect

It's a lovely church and I'm glad they were able to save the historical building even if it is iclosed for safety reasons. 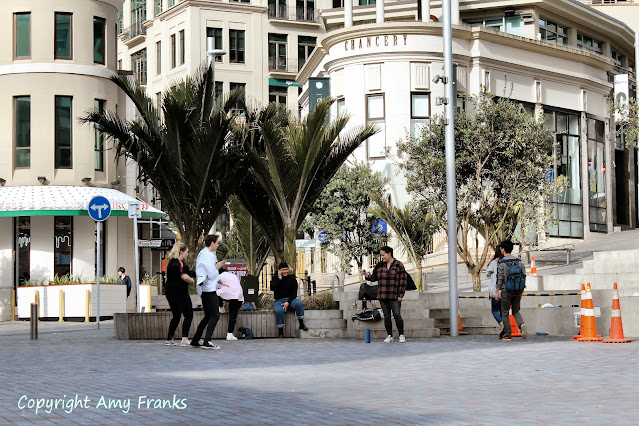