The sun climbs in the sky

Back when we lived in Tauranga I use to frequently stop along the waterfront and take photos of the sunrise. This was when I worked in dentistry 3 years ago and use to start before 8am so there were quite a few opportunities and see morning skies like this. The sun starting to climb in the sky and reflections over the water were just stunning.

Linking up with Skywatch Friday.
By Amy at March 28, 2019 15 comments:
Email ThisBlogThis!Share to TwitterShare to FacebookShare to Pinterest

The spell of Mayor Island/Tuhua

In Tauranga is a wildlife refuge named Mayor Island - Maori name is Tuhua meaning "Spell" and I can understand why. The photo doesn't do it justice but the water colour is see through green and blue. The island has a history of volcanic upheaval and the best feature of the rock is the black Obsidian which was used by early Maori for cutting and scraping tools and also for weapons.

These days it is owned by local Iwi and you can only visit/step foot on this island with strict permission. Some of the birds that live there are bell-birds, tui, wood pigeons, morepork, fantail, kaka, grey warbler, waxeye, kingfisher, pied stilt and kingfisher.

Linking up with Our World Tuesday.
By Amy at March 26, 2019 10 comments:
Email ThisBlogThis!Share to TwitterShare to FacebookShare to Pinterest
Labels: bay of plenty, mayor island, new zealand birds, our world tuesday, tauranga, tuhua 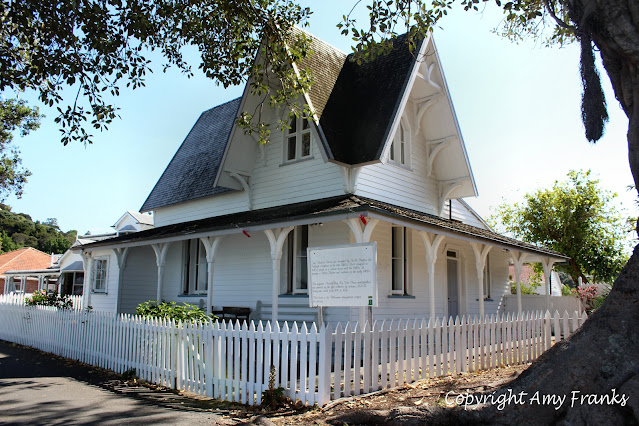 Russell, one of the oldest historical places in NZ, full of old buildings and houses. This one was once the first customs house built in 1870 from an original design by W.H. Clayton, the first colonial architect to our country.

Over the years the eventual drop off in shipping to this area meant the house was no longer needed and the Police department agreed to take it over. There is a huge Moreton Bay Fig tree next to it that was also planted the same year by Mr E.B. Laing who was the first collector of customs from 1870 to 1886. What a view they would've had from here though!
By Amy at March 24, 2019 8 comments:
Email ThisBlogThis!Share to TwitterShare to FacebookShare to Pinterest
Labels: far north, historical buildings, new zealand history, northland nz, russell, russell police station, w.h. clayton 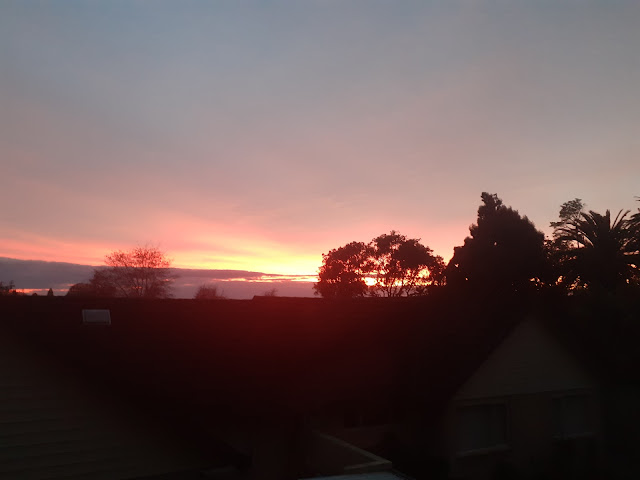 We were in Paihia earlier this week and as we turned into where a market day was being held this sculpture caught my eye. I'm not sure who created it, I have researched but haven't had any luck. To me it looks like it symbolizes waves or water - behind it is a souvenir shop on the wharf. Paihia is very busy from October until late March as the cruise ships stop here when they are in port so there were alot of people exploring the town.

Today we've spent the day enjoying my 48th birthday. We had a nice lunch at a local cafe named the Rusty Tractor Cafe where we both enjoyed servings of one of my favourite meals - eggs benedict.

So yummy and so good to have a nice day off.

On a different matter I don't know if you heard but we had some shootings in a South Island city named Christchurch thanks to a vigilante gunman shooting at some Muslim mosques. We are all totally shocked by this but instead of dividing us as a nation it's bought us together. Hate and racism are terrible things.

Linking up with Our World Tuesday.
By Amy at March 18, 2019 16 comments:
Email ThisBlogThis!Share to TwitterShare to FacebookShare to Pinterest

This is one part of NZ that really feels the cold. Tongariro River is a popular spot for Trout fishing and Kayakers.

The river originates in the central plateau of the north island and it is fed by numerous streams coming off mountain ranges such as Mount Ruapehu, through the town of Turangi before entering Lake Taupo.

It took me quite some time to write this post yesterday and I'll explain later on....but on a recent road-trip through Opua this building caught my eye on the way home. We drove down a small road and I was able to take a photo of this gem.

According to my research, and there wasn't much out there, this was originally the old Stephenson's Store on the waterfront which was a 2 storied combination of a boarding house and store. This is on 6 Beechy Street but apparently numbers 4-7 on this road were purchased by the Bank of NZ in 1883 and a couple of years later 2 retail stores appeared, the one above and one which was a bakery.

It is now being used as luxury rental accommodation and the rooms cost $110 nzd per night, there are some lovely reviews being left about it too.

Back to the first sentence. I often wonder how reliant we are on the internet. Since we've lived here in the last 6 months our internet throughout the far north has been cut off twice through no fault of our own. The first time about a month ago apparently someone accidentally cut through a fibre cable in another town, it took about 2 days to repair but our provider gave us free gigs through our mobile phones so we were able to connect through a hot spot. This time a road slip in Whangarei was the cause and the contractors had to repair the fibre cable for a 1km distance.

So how relevant is technology and the internet these days? Quite relevant I've found out - mind blowing considering when I was growing up we didn't need it for entertainment. We made our own and it was mostly through visiting friends, going bike riding, catching the bus places etc.

This is one place I enjoy driving through when we have the opportunity to do so. Kohukohu is one of those small towns in the Hokianga where it almost feels like you've stepped back in time when when the first settlers arrived in the 1800s.

The small building/shed on the left was originally called the "Herald Building" due to the Hokianga Herald and Hokianga Star newspapers were published from. There are plans to restore it into a community center.

The 2 story building to the right apparently was first built to be a bank, then was a dental surgery then a home bakery but is now being used as a art gallery.

On the rocks please!

I'm not sure what the name of this bay is but it's around the corner from the Mahinepua Peninsula. Pretty much covered with rocks it is littered with pools here and there containing crabs, sprats, shells and various types of seaweed.

Memories of an old shack 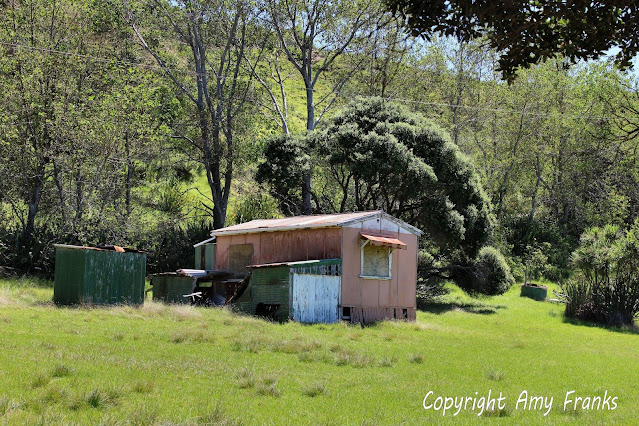 We have all been part of a brief flu that's gone through most people I work with and my family. Nothing major - just something I think that's part of the changes in temperature during the Summer/Autumn changeover. Today the other half and I decided that we hadn't gone on a road-trip for quite some time so we ventured out to the Mahinepua Peninsula which is about 40 minutes from where we live and about 10 minutes from Matauri Bay.


There aren't many houses out there, maybe 1 that's being lived in and 3 that are closed after Summer. This little shack caught my eye though. Part of the back roof of the shed alongside the main dwelling has fallen down and the rest of it looks boarded up and unused. Maybe something dating back to before the 1950s? Not sure...but I wonder what memories it holds within, who were the people that use to enjoy this spectacular beach? hmm... 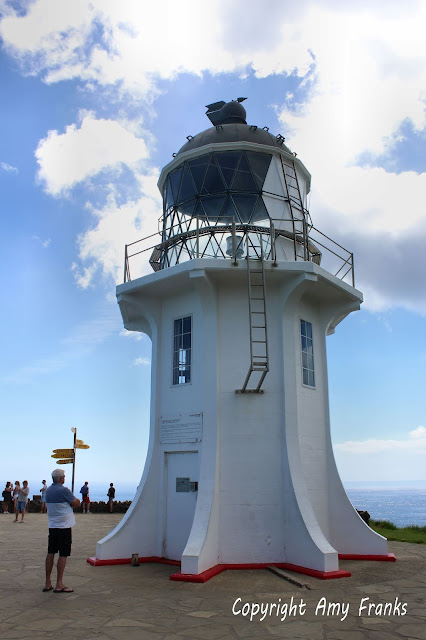 This iconic lighthouse was built in 1941 and first lit in May that same year. It was the last manned lighthouse in NZ and it replaced the Cape Maria Van Diemen lighthouse located on nearby Motuopao Island which had been built in 1879. Accessing that lighthouse had been difficult due to rough seas so in 1938 it was decided to move it to Cape Reinga for safety reason.

The complete lantern fittings were reused though the new lighthouse was fitted with a 1000 watt electrical lamp instead that could be seen for 26 nautical miles and the lamp was powered with a diesel generator.

In 1987 the lighthouse was fully automated and keepers were no longer needed. It is now monitored remotely from Wellington. To get here from where we live it is about 3 hours drive north through a long isolated main state highway where there is the occasional farm and shop but it s a very popular tourist attraction.

There are so many phone and internet companies here. There's Spark, Vodafone, Skinny, 2 degrees and many more. In most towns one of the ... 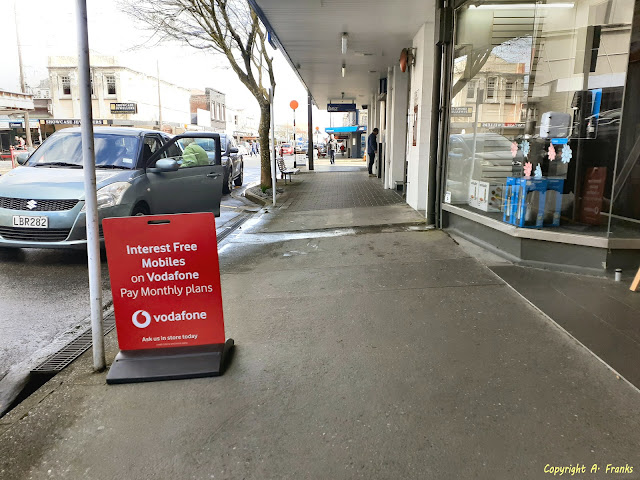