Things I love about Summer:


While we are looking forward to our holiday in Fiji we are starting to plan and save for a potential holiday in the Mediterranean for 2020 (Local Alien this may interest you). Places on our list are Greece, Yugoslavia, Italy and Venice. Time to save even more...

Linking up with Our World Tuesday.

By Amy 14 comments:
Email ThisBlogThis!Share to TwitterShare to FacebookShare to Pinterest

This weekend for us Kiwis is Anniversary Weekend. Monday is a public holiday and usually is my 2nd day off, unfortunately I've been called in to work for a colleague tomorrow so I get stuck with another late closing shift and a 6 day week.

The meaning behind Anniversary Weekend is it's the day that William Hobson first sighted the north island at the Bay of Islands. In 1840 Hobson arrived in NZ, quickly signed a treaty with the Maori that led to this country becoming a colony. It was on 18 September 1840 that Hobson founded Auckland and a small regatta was held there at Waitemata Harbour involving only 3 races.

In 1850 29th January became Anniversary Day and the regatta became official. Tomorrow is the 28th but it usually falls on the last weekend in January as Monday being the public holiday.
By Amy 11 comments:
Email ThisBlogThis!Share to TwitterShare to FacebookShare to Pinterest
Labels: anniversary weekend, auckland city, bay of islands, new zealand history, treaty of waitangi, waitemata harbour, william hobson

We are in the middle of our Summer, so many boats and people out there. We haven't taken our boat out for a few weeks now mostly because the holiday season brings so many other fishing boats enjoying the ocean like us. There's not alot of big fish out there just lots of baby ones and usually once everyone's gone home come late January early February things start to look up. We have booked a week long holiday in Fiji for July so while winter will be here we will be in the sunny tropics.

Linking up with Skywatch Friday.
By Amy 9 comments:
Email ThisBlogThis!Share to TwitterShare to FacebookShare to Pinterest

We've had very clear skies lately, not something that happens often. We heard there was a blood moon for those in the northern hemisphere but sadly us southerners had no such luck. At least I got this shot of the full moon though over the weekend which was very quiet, I had sunblock on but still got slightly burned while water-blasting our outside deck.

Linking up with Our World Tuesday.
By Amy 16 comments:
Email ThisBlogThis!Share to TwitterShare to FacebookShare to Pinterest

I've been wanting to explore this church for quite some time, it has a huge history in NZ's culture. Christ Church in Russell also known as Te Whare Karakia o Kororareka also known as the Kororareka Church is the country's oldest existing church built in 1835. The earliest grave we could find there was from 1836.

The first missionaries based in Paihia rowed across the water to Russell to provide prayer services in peoples homes. Russell was originally called Kororareka and had the nickname of "hellhole of the Pacific".

The missionaries purchased the land from local chiefs Rewa, Wharerahi and Moka - the agreement between them was that Maori and Pakeha should have equal rights of burial.

In 1845 Reverend Robert Burrows was the first resident clergyman living in the vicarage on the hillside beside the church.

In 1845 during the Battle of Kororareka between the British and Maori, the church was hit by stray musket and cannon balls of which you can see holes in the outside walls of the church today.

We tried to take photos of the interior of the church but there was a service being held the time we were there but hopefully we will be back there at some point.
By Amy 7 comments:
Email ThisBlogThis!Share to TwitterShare to FacebookShare to Pinterest
Labels: battle of kororareka, christ church, far north, new zealand historical churches, new zealand history, northland nz, reverend robert burrows, russell

We discovered some new beaches last weekend, one of which was Tapeka Point which is about 10 minutes out of Russell. A quiet little spot with only a handful of happy people mostly families enjoying the cove. There was a pontoon that people swim out to and jump off, there were towels laid on the grass and sand ready for sunbathing and there were picnic spots all set up. One of those hot Summer days...

First time I have ever travelled on the Opua Ferry in the weekend and it was a very quick trip too. Fullers which is a national NZ company own alot of ferry services just about everywhere. This one is a transport ferry so once we had parked our car and it had started on it's way we got out and enjoyed the fresh air. Our destination was to be taken to Okiato Wharf which is a small settlement just before Russell.

The other side of Opua has many yachts and boats moored with what looks like a private boat shed in the distance. There are also quite a few houses and baches along the side of the cliffs.

You could almost say that these boats moored alongside the wharf are mini super yachts. I've seen much bigger ones.

This one here is owned by Jemison Marine and is available for hire. It has air conditioning, a gym and wifi connection. It is 95.14ft and can accommodate 8 guests overnight . Posh aye?
By Amy 12 comments:
Email ThisBlogThis!Share to TwitterShare to FacebookShare to Pinterest
Labels: far north, new zealand scenery, northland nz, okiato, opua, opua ferry, opua wharf

The Duke of Marlborough Hotel Est 1827

This stunning place has quite a history. This morning we took a trip out to nearby Russell and after exploring the town we decided to have lunch here at the Duke of Marlborough Hotel. This is the back of the building situated along the main road near the shops.

This is the front entrance of the hotel and it faces the waterfront named "The Strand". The sign outside says "Refreshing rascals and reprobates since 1827".

According to the hotel's website the information on here says: It began it's life as Johnny Johnston's Grog Shop (liquor store). The owner Johnny was an ex convict who turned his life around and learned the local Maori language. The interior at first glance looks extremely well maintained but I'm thinking under that 1970's carpet that I recognize as being similar to what my mother had when I was a child probably has polished Kauri floorboards underneath.

Anyway the friendship between Johnny and the Maori people lead to him being able to purchase the freehold site of the hotel which was one of the first land sales to a European in NZ.

Back then in the 1830's Russell was named Kororareka and was the largest whaling port in the Southern Hemisphere. Johnny changed the name of of the hotel to the Duke of Marlborough and his first alcohol licence still hangs up in the bar today.

The first hotel burned down during the battle of Kororareka in 1845 and was rebuilt . From 1878 to 1923 the hotel changed hands 8 times. Between 1923 and 1974 it was owned by Hancock Hotels (aka Lion Breweries). In 1931 the second building again caught fire and burned down then a third building was built in 1875 and housed the telegraph workers at Cable bay but was shipped down the coast and dragged into place by steam traction engine in 1932.

After this the hotel again changed hands 5 times and is currently owned by 4 owners who have restored it beautifully. It's now being used as a restaurant/bar and a wedding venue. Today I ordered a Yellowfin Tuna dish, and as you can see above it looks and was delicious.

This baby was built in apparently 1886 and is on the grounds of Auckland's Waikumete Cemetery. It was built by a man named Ebenezer Morris who emigrated to NZ in 1877. He also had other business in the Kaipara district of Matakohe plus Auckland and Thames. It's named the Chapel of of Faith and was originally as a mortuary chapel but is now being hired out for spiritual events, christenings, weddings, funerals and prayer meetings.

On the day we visited it was closed so all I could get was a photo of the outside.
By Amy 10 comments:
Email ThisBlogThis!Share to TwitterShare to FacebookShare to Pinterest
Labels: auckland, ebenezer morris, historical buildings, historical churches, new zealand history, waikumete cemetery, waikumete chapel of faith

It's a fish's game

Yesterday we took the boat out on the water again and spent most of the day out there. Summer is the hardest time to catch anything decent because of all the people out there doing the same thing so when I came home with these 2 babies (estimated to be around 4-5 lbs) was very happy. The top one is a Tarakihi and the bottom one is a Snapper.

We like to use a mixture of pilchards, calamari and benito as bait. I also caught this baby shark at one point also called dogfish but it went straight back in the water.

The other half kept catching baby snapper including this small Gurnard which was very spiny.

And this one that we thought at first was an Orange Roughy but it turned out to be a Sea Perch. We moved around at least 5 different spots but every one was the same. A hard day to get anything decent but lots of fun. We are thinking that once we fillet my fish tonight perhaps smoking one and turning the other into some sort of yellow thai fish cake. What do you think?

These guys are so friendly. "Kunekune" means fat and round in Maori and that they definitely are. They are a smaller type of pig with short legs and short snouts.

Some people breed them for show, others breed them as food.  Very sociable and placid, they do well with people contact as well as being intelligent

I happened to be visiting an area just outside of Kerikeri where I spied them being very curious at the edge of the fence of a farm. Think they were eager to check us out.
By Amy 12 comments:
Email ThisBlogThis!Share to TwitterShare to FacebookShare to Pinterest

Here in NZ Summer is here until early March. We have various statutory holidays that fall between Christmas day and the first weekend of February. Normally the way the laws work with employment is if you are rostered on for one of those days you get paid your hourly rate plus half of that also. So far I've worked a few of those and had a couple of days off in between which has been nice financially and restfully.

It's also been extremely hot here, Northland which is in the top part of NZ's north island is warmer than the rest of the country and luckily we have a heat pump in 3 rooms of our house so we have been turning that off for air conditioning - it's been wonderful having cool air coming through.

New Year's eve wasn't anything spectacular for us, I had to work the next day so we just had a quiet one with a couple of cold ciders and a good movie. Happy New Year to you!
By Amy 10 comments:
Email ThisBlogThis!Share to TwitterShare to FacebookShare to Pinterest
Newer Posts Older Posts Home
Subscribe to: Posts (Atom)

I spotted this mural on the side of the veterinary clinic in Kawakawa which was painted by kiwi artist Angela Newport who is originally fro... 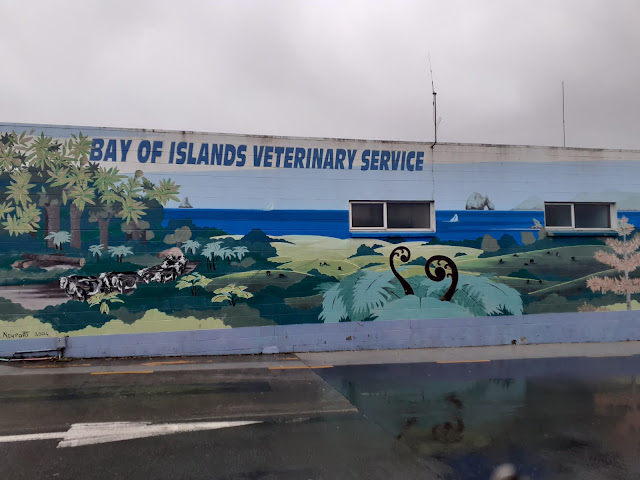