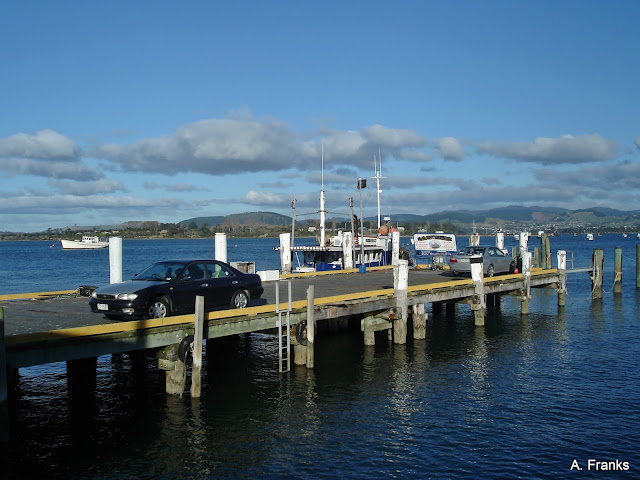 This morning after dropping B at work I drove around in the early morning chill with my camera looking for things that caught my eye. This is one of my favourite quiet spots to sit and think, it's the wharf down at Tauranga Marina, where boats are moored, there's a restaurant belonging to ex ACDC drummer Phil and in the distance is the motorway that links Mount Maunganui to Tauranga city plus nearby is the Port of Tauranga. I relish moments like this as there's hardly anyone else out and about. 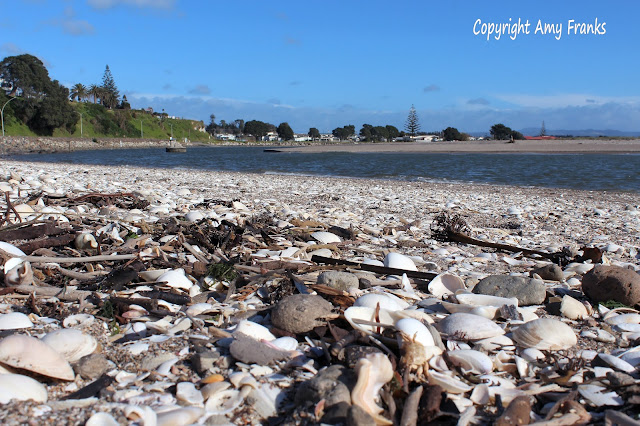 Last weekend we drove out to Maketu Beach, about 30 minutes from here. A previous post from a week ago showed a photo of the local historical church but in these shots I decided to focus on not just the beach but also two things I like the most....shells and seaweed. Just the shapes, colours and textures interest me - there are so many varieties of both.

On another note, things have been really quiet this week without my daughter but she did get to go to her senior school ball with her friends. Her photos show a very happy girl so that I am pleased about :-)

Hope your coming week is positive...
By Amy at July 24, 2016 5 comments:
Email ThisBlogThis!Share to TwitterShare to FacebookShare to Pinterest

The sunset when my daughter stayed

So, it's been school holidays here for the last 2 weeks. Last week my 18 year old daughter came down to stay with us and on the night I picked her up from the bus stop I caught this sunset around the corner in Pilot Bay.  The water looked so peaceful and calm, perfect fishing weather. Anyway as she is finishing her final year at high school she sadly had to go back up north, so this Tuesday just gone I tearfully said goodbye until next time she's down this way again.

I'd like to know how your week has been so leave me a comment :-)
By Amy at July 21, 2016 2 comments:
Email ThisBlogThis!Share to TwitterShare to FacebookShare to Pinterest

Sunday we drove about 25 minutes south of Tauranga to a small coastal area named Maketu (pronounced Mack-a-too) just to get out of the house for a bit. Typically Winter here is kinda boring, we don't get snow but we do mostly get fine chilly days. We stopped at the local beach nearby and on the way back I saw this church and had to stop to get a photo.

Apparently the St Peter's church in the photo above was originally built in 1887 by Father James Madan of the Mill Hill Mission at Matata assisted by local Maori people. Maketu also sells Maketu pies which are well known around the region for being the best around, I have yet to try them but when I do I'll be sure to share what I think of them :-)
By Amy at July 17, 2016 5 comments:
Email ThisBlogThis!Share to TwitterShare to FacebookShare to Pinterest

Tuesday I had the morning off work so my daughter (who is visiting at the moment over the school holidays) and I decided to go for a short walk to the beach and get some fresh winter air. Quite a few other people were out and about including those walking their dogs, this sight I thought was rather cute - two pooches met up, sniffed and played for a bit chasing each other on the sand. Typical dog stuff except one was large and one tiny...I wonder what dogs communicate to other dogs when they meet up?
By Amy at July 13, 2016 6 comments:
Email ThisBlogThis!Share to TwitterShare to FacebookShare to Pinterest

The little bull at Hamilton Gardens

Back in January this year, on a sweltering hot Summer's day the other half and I attended the wedding of one of his 4 daughters which was held at Hamilton Gardens. While we were walking around waiting for the other guests to arrive and attempting to cool down by sitting under a tree we spotted this sculpture of a resting bull in amongst the colourful scenery. The "Little Bull" as it's called symbolizes the area's link to the farming and dairy industry - apparently it had mixed reviews when it was first placed there, personally I kind of like it :-)
By Amy at July 10, 2016 9 comments:
Email ThisBlogThis!Share to TwitterShare to FacebookShare to Pinterest

Winter pathway to the beach

Another view on one of my walks, this time is a pathway to Mount Maunganui beach - some stunning colours sometimes, the island in the distance is named Rabbit Island :-)

For more Skywatch Fridays click here...
By Amy at July 07, 2016 11 comments:
Email ThisBlogThis!Share to TwitterShare to FacebookShare to Pinterest

Dog walking at the beach

While on a walk along Mount Maunganui beach on Sunday we passed this very very cute sight - a young lady walking 4 very small very adorable little dogs who all looked extremely happy to be there. Love seeing things like this! 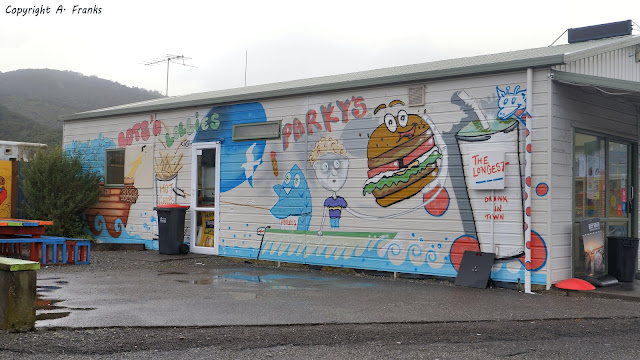