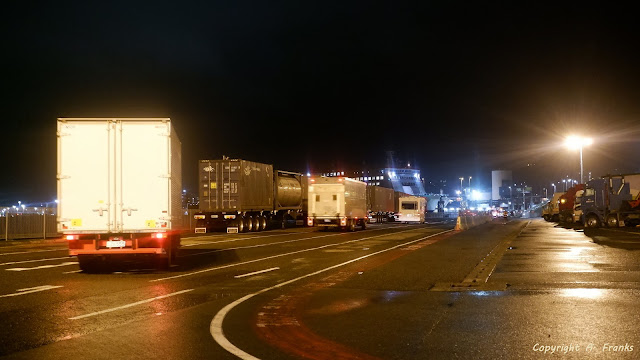 Waiting, waiting, waiting. We waited in Wellington to cross the Cook Strait on the Inter-Island Ferry and ended up waiting in line for 4 hours in the dark in our cars, I think there were alot of frustrated people. Finally got on there at 9pm and arrived in Picton just after midnight. My 2 adult children got seasick on the ferry and spent most of the time in the bathroom, B and I just about fell asleep in our seats. 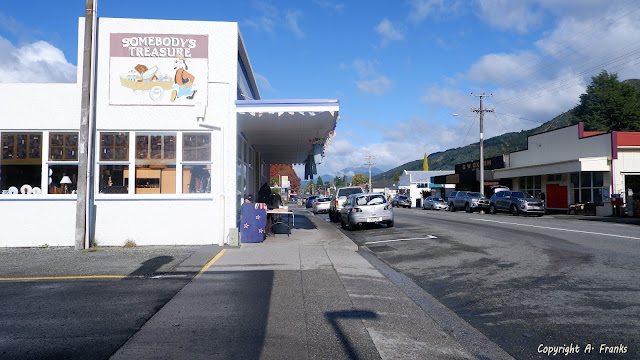 I walked through this scene with B and the kids when we stopped in Murchison. It was quite a chilly 10 degrees and the locals that we talked to remarked on how I had a t-shirt on - well I don't feel the cold much so I explained where we were from (the far north where it is much warmer). In front of this second hand shop there were 2 veterans selling poppies in preparation for ANZAC Day (Australia, New Zealand Army Corps) so we donated all the coins we had and wore a poppy each. 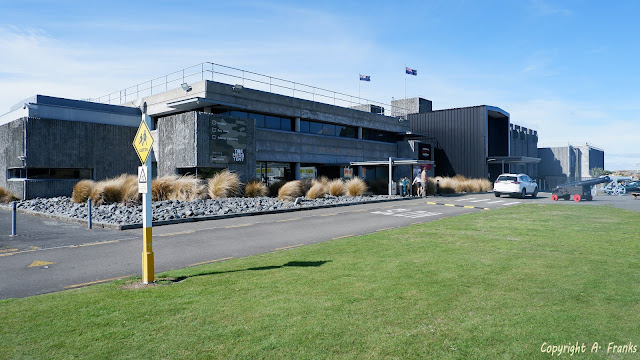 Another place we stopped at (toilet breaks are good) in the central North Island was the National Army Museum, although we didn't go inside I took some photos of some of the displays on the outside. 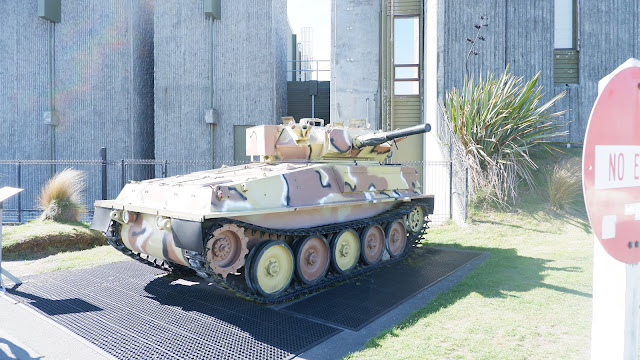 Waiouru is a small town that gets extremely cold in the Winter due to it being near the Desert Road and Mount Ruapehu. 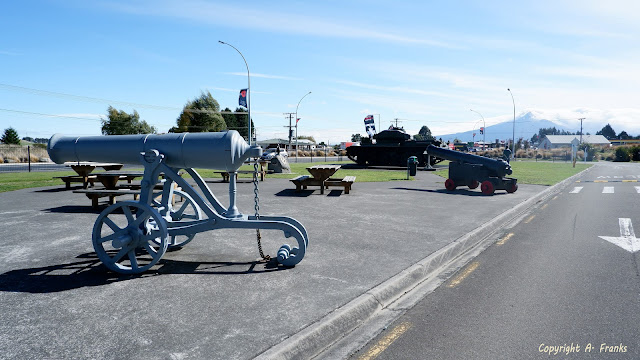 The country's army camps are not far from here and they tend to use the vast spacious land along next to the main highway for training. 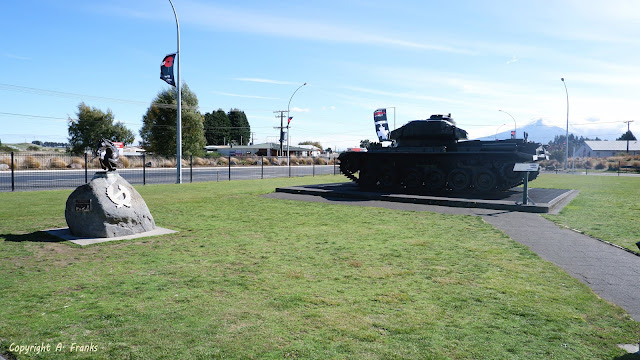 The purpose of the museum is to teach people not just military history but also the development of New Zealand's Army and how we have contributed to the world. 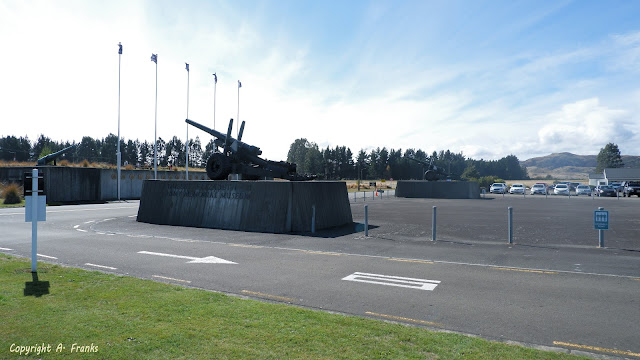 The museum itself was first opened in 1978 by the Governor General of that time Sir Keith Holyoake.  Over the years it has gone through more developments including storage and gallery space. 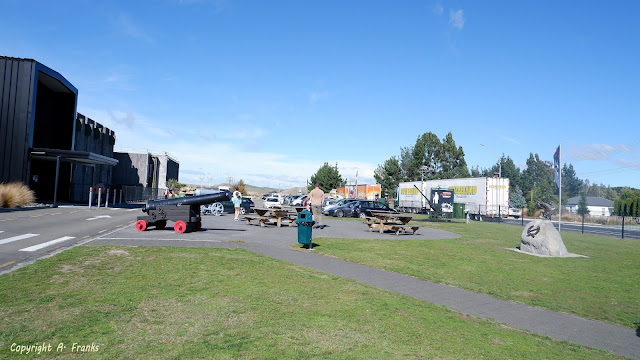 Alot of the relics on the outside above are some of the equipment that has been used over the years, these days things are alot more modern to compete with the rest of the world.

Linking up with Through my lens, Travel Tuesday, Tuesday Treasures, My corner of the world and Wordless Wednesday 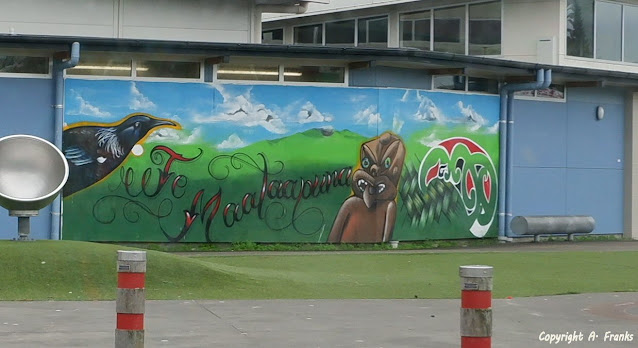 While driving through the outskirts of Taupo 3 days ago I spotted this kiwiana mural on the side of the Taupo Turtle Pools building in Turangi. Just a bit of background the pools aren't for Turtles they are for toddlers, babies and little children to learn to swim but back to the mural which says "Te Maataapuna" which means "the source" and features a Tui along with a carving that looks like a Taniwha. I can't find who the artist is but I suspect it's part of the Taupo Graffiato Street Festival.

Linking up with Mural Monday 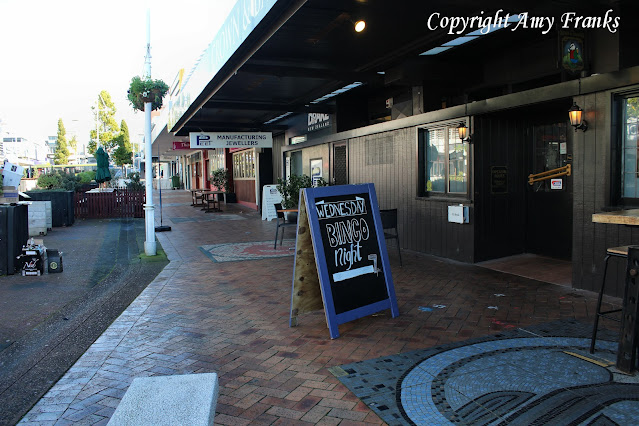 Wednesday night Bingo anyone? A photo from the 3 years I lived in Tauranga one day when I was wandering around by the waterfront where I spotted this sign. Does anyone actually play Bingo anymore? I know my grandparents use to love going to the local hall for weekly Bingo. There are other things to look at in this photo too like the "Peet Jewellers" sign - Ive never heard of them either and the "Drake recruitment" sign. 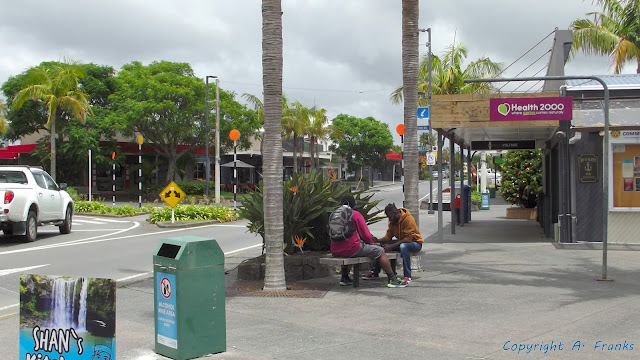 New Zealand has alot of people from other countries, especially from Fiji and the Pacific Islands who spend a few months here and there helping to pick fruit at different orchards. In Kerikeri there are orange orchards and avocado orchards just to name 2 and the money the people earn is quite often sent home to their families. 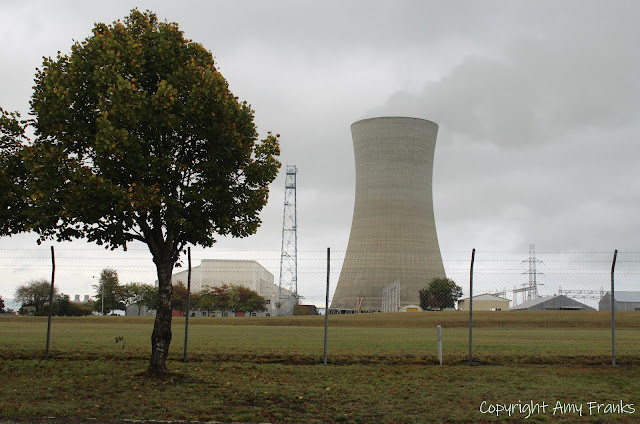 One place B was eager to visit while we were in Taupo last year is Ohaaki Power Station just outside of town. It's a geothermal powered and operated by Contact Energy and it is the only one in the country to have a 105m high natural draft cooling tower.
Edited to add: We will be travelling to the South Island this week for our move so I may not be around until maybe Saturday or Sunday so apart from my posts being automatically set I will see you all then.

Linking up with Through my lens, Travel Tuesday, Tuesday Treasures, My corner of the world and Wordless Wednesday 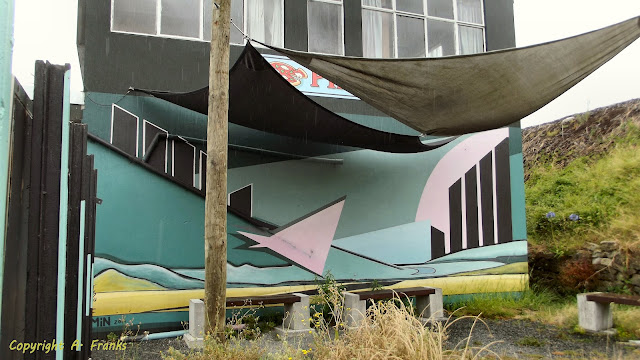 Another mural from Whangarei this week. Painted by artist Melinda Butt who describes her art as being on a mission to transform neglected functional spaces into bright enlivening experiences for the enjoyment of the community. I'm not sure what this one is but it's part of the Street Prints Manaia Festival.

Linking up with Mural Monday 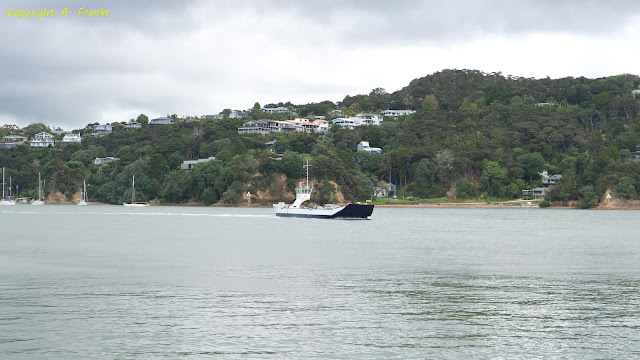 On the odd occasion when we want to visit Russell we have to get on the Opua Car Ferry to take us there. There are 2 ferries which go back and forth as it is usually very busy. 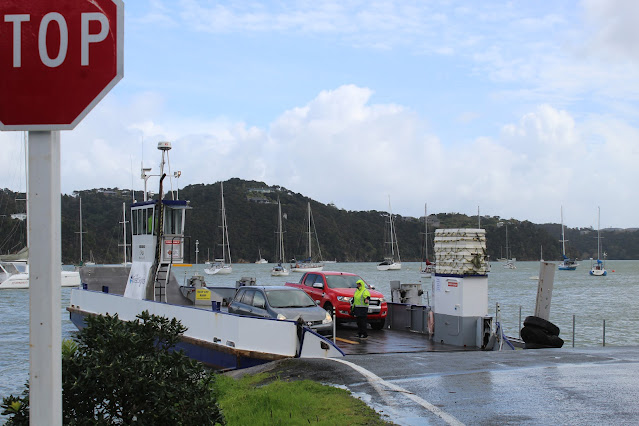 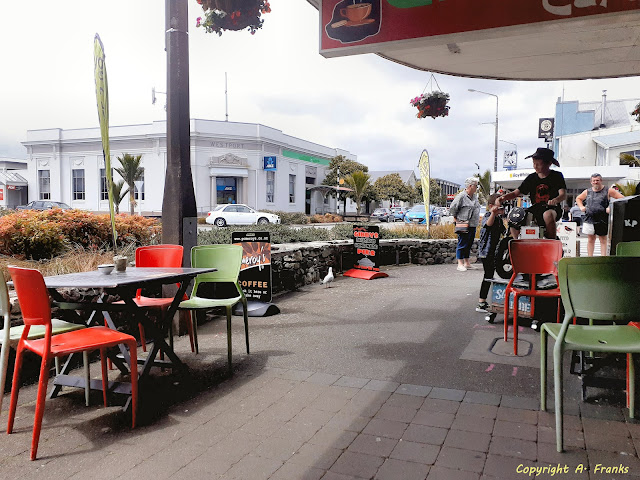 One from our day in Westport earlier this year while we were eating lunch outside one of the local cafes. The boy sitting on the mechanical toy seems to be having fun and even has a cowboy hat on. 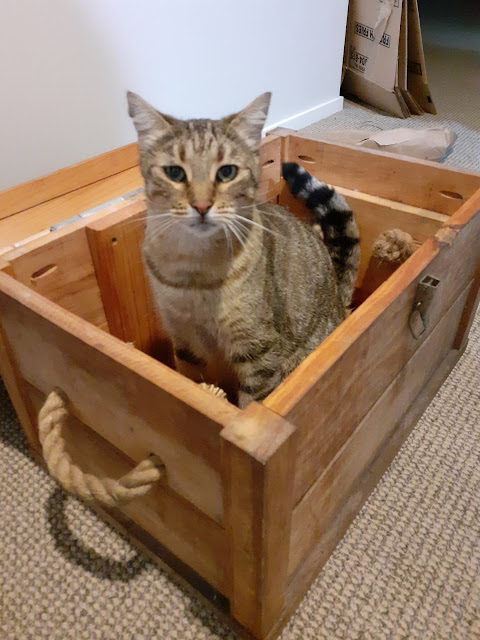 My 2 adult children have been visiting their father in Auckland over the weekend and they managed to fit in my son's car 2 pieces of wood furniture he made in high school that their father has been storing for him. On the way home through Kawakawa he got a flat tyre and apparently didn't have the right equipment to change a tyre. B and I drove the 25 minutes out there to take him my stuff and once they got home Mr Bruno decided to claim one of the pieces (a treasure chest) for himself. 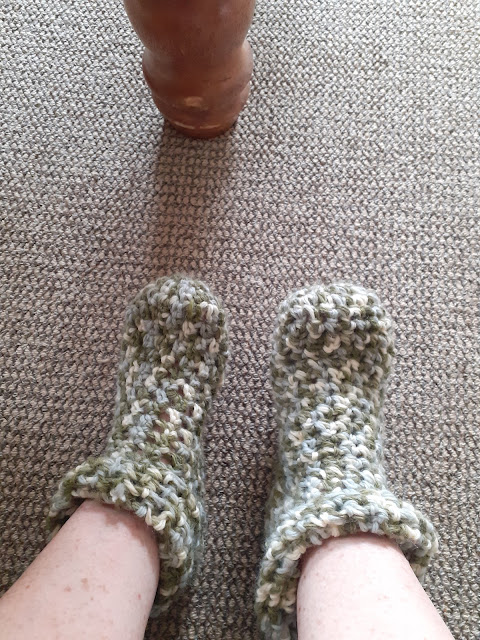 We have 9 days to go until our move to the South Island. I have been making crochet slippers for everyone, it was something to do while we were stuck at home with covid. 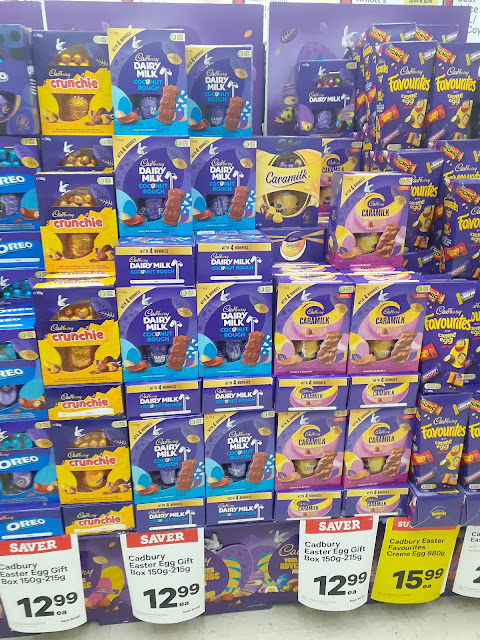 And in the shops displays like this started showing up about a month ago, this is only one of them.

Linking up with Through my lens, Tuesday Treasures, My corner of the world and Wordless Wednesday.

By Amy at April 12, 2022 16 comments:
Email ThisBlogThis!Share to TwitterShare to FacebookShare to Pinterest
Labels: bruno, cats, easter, my corner of the world, through my lens, tuesday treasures, wordless wednesday 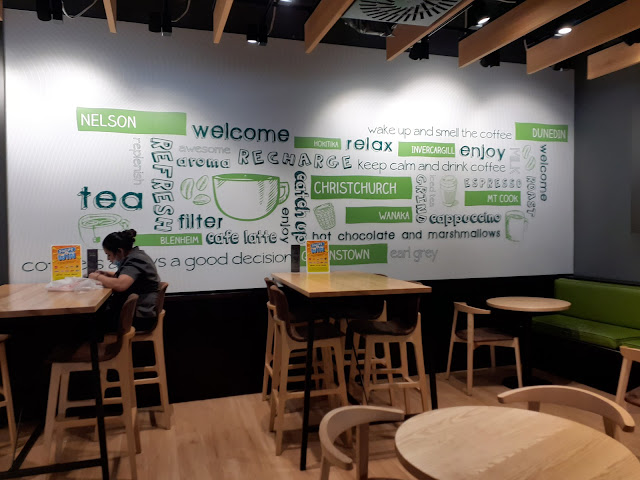 I spotted this mural in Christchurch Airport earlier this year. Situated against a wall in the cafe it talks about how coffee and different types of coffee throughout New Zealand is so necessary. I quite agree. 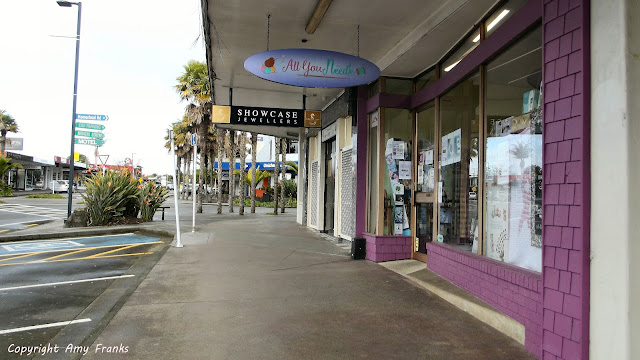 This local shop in my town is one of my favourite places to visit. "All you needle" is a craft shop which sells knitting and crochet supplies, sewing machines, accessories and tools along with needlwork.

By Amy at April 09, 2022 12 comments:
Email ThisBlogThis!Share to TwitterShare to FacebookShare to Pinterest
Labels: all you needle, kerikeri, weekend reflections, weekend roundup 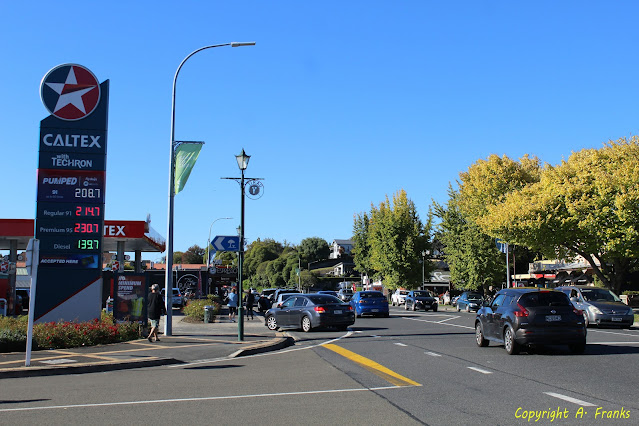 It was a year ago we were holidaying in Taupo and on the way home we stopped in Tirau where I took my usual loads of photos 😂.  The petrol prices since then have risen dramatically, mostly because of the fighting  between Russia and Ukraine. At the moment, depending on where you live in New Zealand they can range from between $2.70 to $3.30 per litre for standard unleaded. It's become pretty crazy.
And thankfully I am back at work today due to testing negative for covid on Wednesday. I'm feeling alot better but just stuck with a bit of a dry cough but from what I hear that's fairly normal. Thank you for all the good wishes. 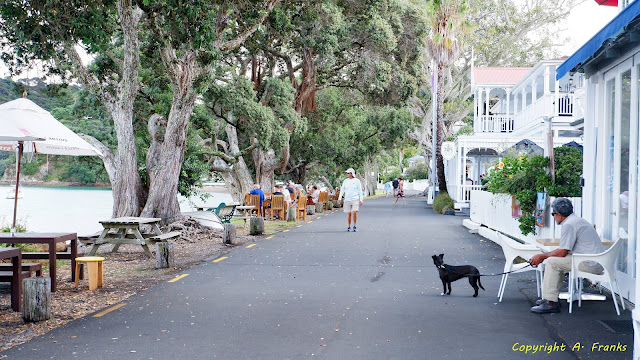 I couldnt help but take a photo of this very good dog who was waiting with his owner outside a cafe in Russell last time we were out there. I wonder if the dog was people watching?

Linking up with Through my lens, Tuesday Treasures, Travel Tuesday, My corner of the world and Wordless Wednesday.

By Amy at April 05, 2022 10 comments:
Email ThisBlogThis!Share to TwitterShare to FacebookShare to Pinterest
Labels: autumn, dogs, my corner of the world, russell, through my lens, travel tuesday, tuesday treasures, wordless wednesday 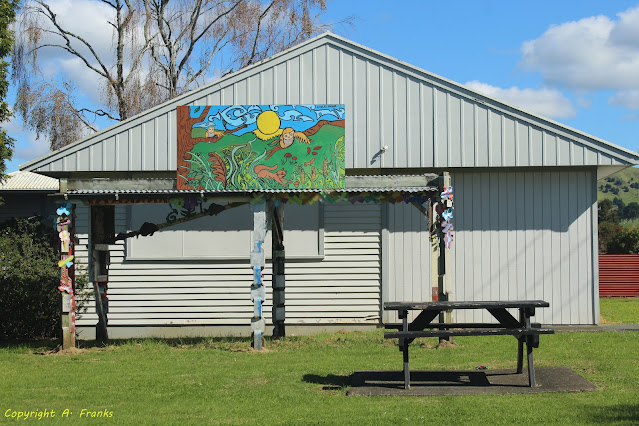 Last time I drove through Ohaeawai I spotted this wee mural on the front of what looks like a shed or garage which was painted by artist Carlee Pawa who lives in Kaitaia. 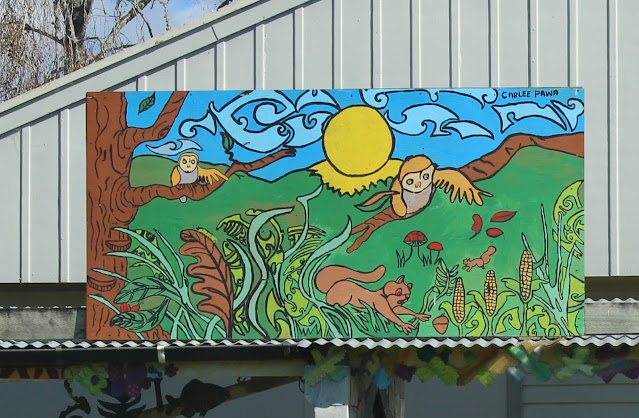 Looking closer at it, it seems like the mural has some stalks of corn, leaves, some Maori tribal art, some owls and a squirrel (which we don't have here). 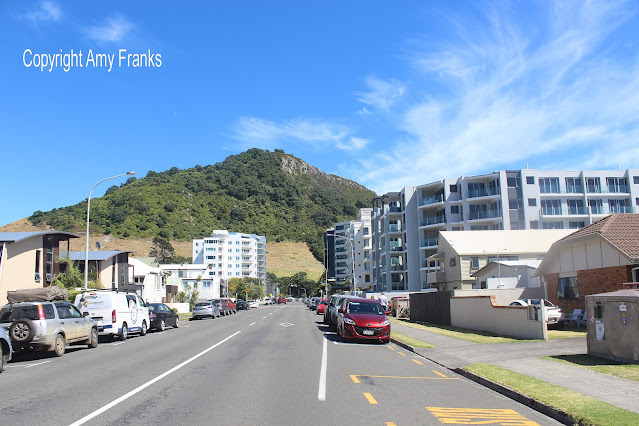 I'd forgotten about this photo I took when we lived in Mount Maunganui 4 years ago. Sometimes I take random photos of streets and this one is one of the ones near the beach that's full of mostly apartments. In the background is Mauao (which means "caught in the light of day") - it's the sacred mountain based at the entrance of Tauranga Harbour. It's a very popular place for people to climb up as it's quite steep and good for fitness.
Thank you for those of us who have wished us well. Earlier last week my youngest son caught covid off a work colleague, 3 days later B came down with it then my daughter and I got it. So say it's like a mild flu is far from it, B had a mild dose and my son came right from it after 4 days. I never want to go through this again ever, the exhaustion is so great that I had 3 naps yesterday and we have been drinking lemon juice with honey every day plus taking vitamins and we have all been double vaxxed and boosted.