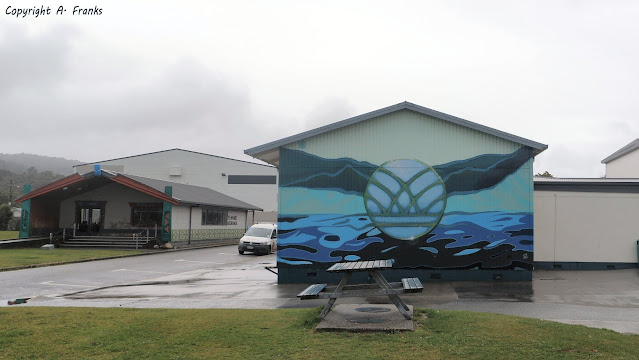 Another Greymouth mural painted on the side of one of the classrooms by Mark Haldane and designed by ex student Cameron Urban in 2016.

It reflects the unique landscape of Greymouth with the hills of north and south meeting by the sea. 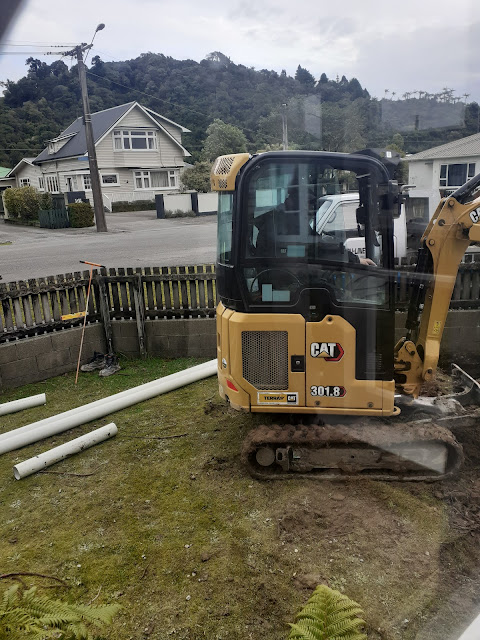 Last week we had some contractors with their mini digger in our front yard, their job was to separate the sewerage from the stormwater so for 2 days they were busy installing new pipework. Now they are just waiting for a council inspector to pass their work.
Linking up with Weekend reflections and Weekend roundup.
By Amy at July 30, 2022 12 comments:
Email ThisBlogThis!Share to TwitterShare to FacebookShare to Pinterest
Labels: construction, greymouth, weekend reflections, weekend roundup 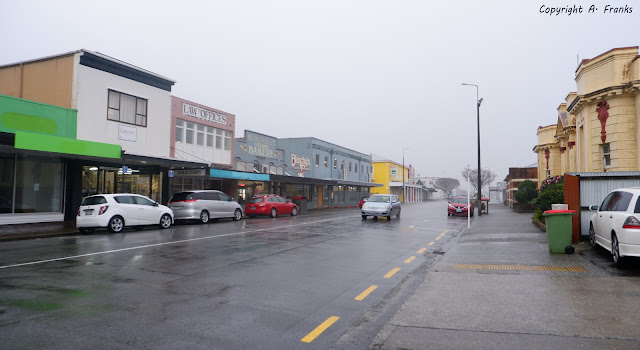 With the middle of winter well and truly here we are getting more and more rainy days. It's not often I go out on my days off, except for food shopping but this one particular day this week I did need to go into town and ended up running through the pelting rain, of course I stopped after getting out of my car to get this shot. Greymouth is full of old buildings and as you can see above, the ones that have been here originally plus the ones added in recent years have been repurposed by local businesses.

Linking up with Skywatch Friday and Tom's signs 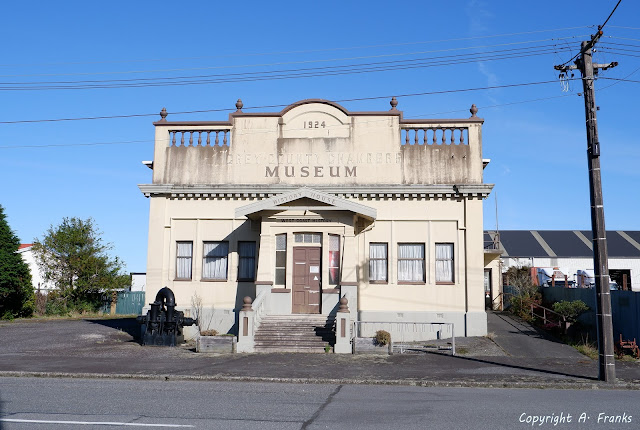 There are a few buildings around Greymouth that are closed down due to having issues with being earthquake prone. This one is just outside of the city center named the "Grey County Chambers Museum" established in 1924. The council was formed in 1877 but in 1989 the building was vacated when the county council merged with the boroughs of Greymouth, Runanga and the harbour board.

The project to turn the empty building into a history museum was instigated by former deputy mayor Kevin Brown, Mayor of Grey Ron Hibbs and Kevin Beams of Grey District Council. Volunteers were found to fit out the building and assemble a collection.

In February 2017 a seismic assessment of the Grey County Council Chambers found it was at only 10 per cent of the new building standard (NBS), well below the 34 per cent required for a public building; the standards had been revised following the 2010–2011 Christchurch Earthquakes. The cost to strengthen the building would be $142,000, and it is in a flood zone. The museum was closed and the archives moved to the Grey District Library. Several options were pursued: eventually incorporating the museum into a "Discovery Centre", disbanding the collection, or moving to another space. Information from Wikipedia.

Linking up with Through my lens, Ruby Tuesday, Tuesday treasures, My corner of the world and Wordless Wednesday. 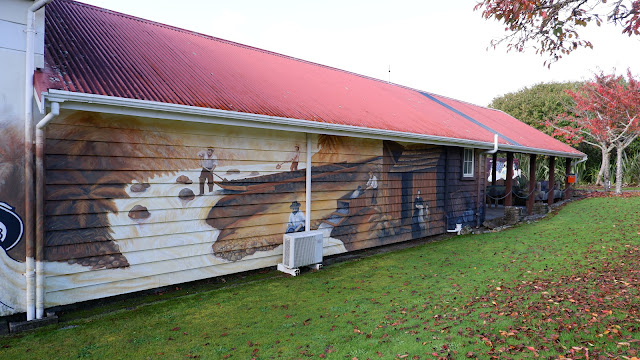 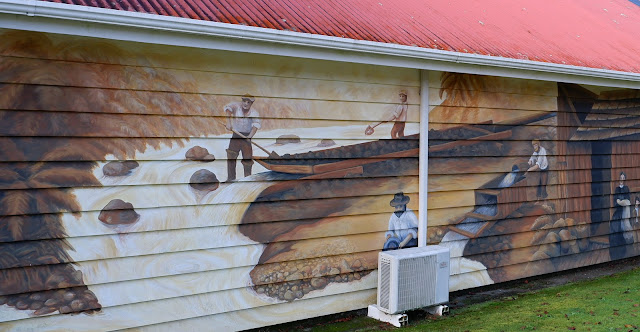 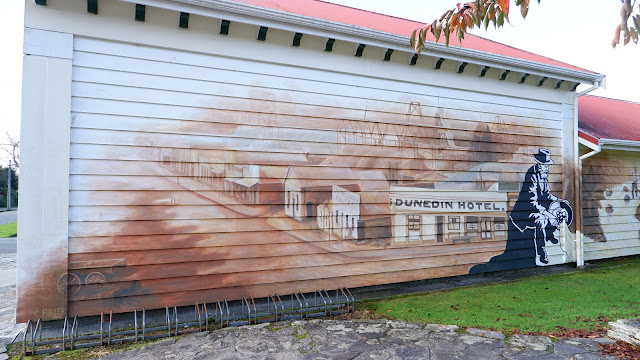 These 2 murals are on the side of the Goldfields Information Centre in Ross, just outside of Hokitika. They depict the old mining days in the 1800s when many immigrants came to the West Coast to try their luck in making a fortune. 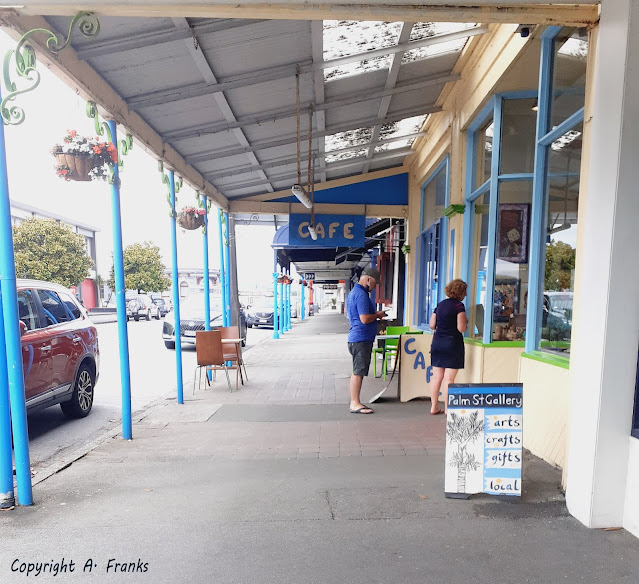 One from when we were in Westport in January before we moved to the west coast.  Behind the couple in the photo there is a cafe situated on the corner of the main street. But it looks like they are about to enter the Palm Street Gallery which is nestled in among the shops along the main street through town.

Apparently it is a community gallery celebrating the artists all around Westport. They have paintings, wood carvings, bone carvings, sculptures, flaxwork, beadwork, candle, pounamu jewellery and cards.

Linking up with Weekend Reflections and Weekend Roundup. 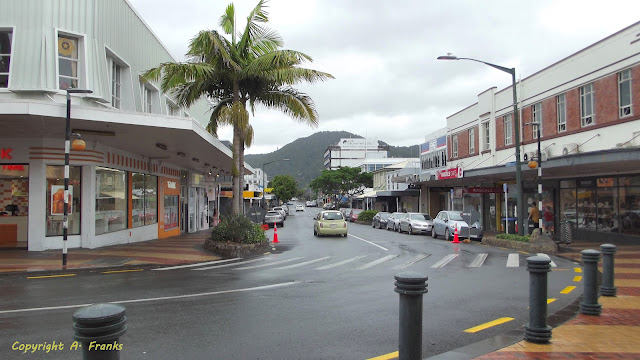 Last time we were in Whangarei was December 2021 when Northland had a particularly wet early Summer. This was taken next to The Strand near the centre of town and there is a very yummy sushi shop across the road.
Linking up with Skywatch Friday and Tom's signs
By Amy at July 21, 2022 16 comments:
Email ThisBlogThis!Share to TwitterShare to FacebookShare to Pinterest
Labels: skywatch friday, summer, tom's signs, whangarei 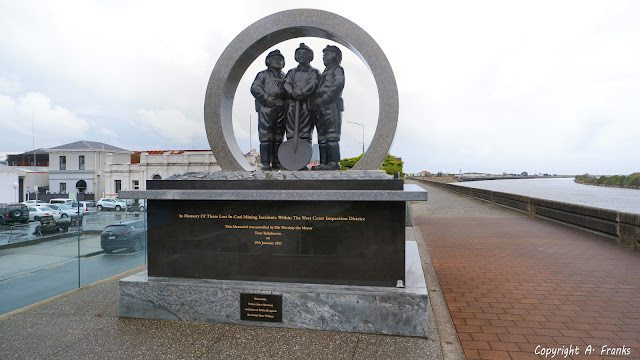 Greymouth and all along the west coast have quite a few monuments dedicated to those who have lost their lives in coal mining accidents over the years. This one in town next to the Grey River is no different. It's inscribed with words that read "In memory of those lost in coal mining incidents within west coast inspection district". It was unveiled by the Tony Kokshoorn who was the mayor at the time on 19th January 2013.
Linking up with Through my lens, Ruby Tuesday, Tuesday treasures, My corner of the world and Wordless Wednesday.
By Amy at July 19, 2022 10 comments:
Email ThisBlogThis!Share to TwitterShare to FacebookShare to Pinterest
Labels: greymouth history, mining disasters, mining monuments, my corner of the world, ruby tuesday, through my lens, tuesday treasures, west coast history, wordless wednesday 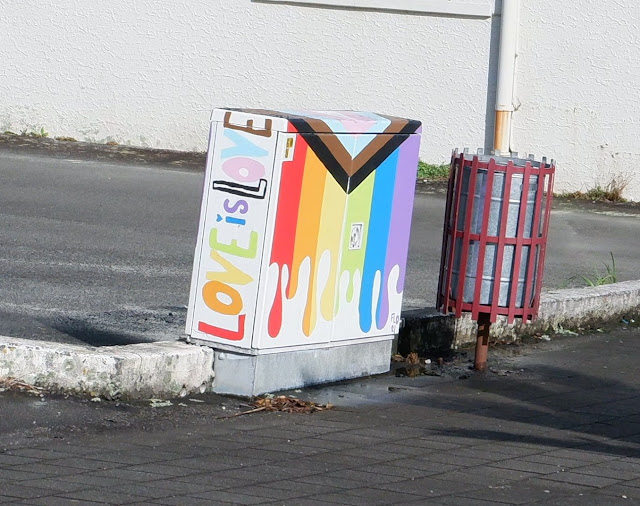 There's quite alot of utility boxes around Greymouth that have been painted with artistic creations by local artists. This one by Billie Gully represents the lgbtqia community who says:
"My design is based on the new progress pride flag design with the front side being the basid pride flag that everyone knows dripping down and on top of the trans flag being the pink and white  and the black and brown representing BLM (Black Lives Matter).

On both sides I have written Love is Love because that's the one thing I want people to take away from this Chorus cabinet." 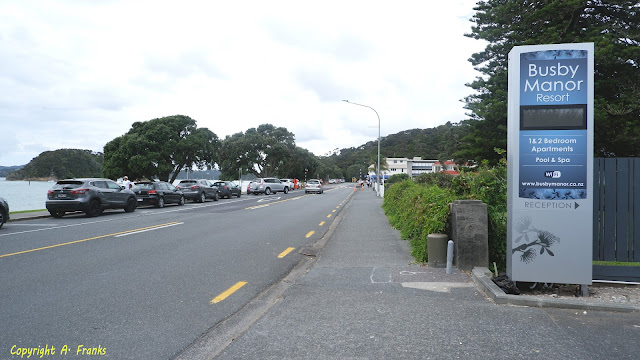 One from my visits to Paihia when we lived in Kerikeri. The Busby Manor resort is on the waterfront overlooking the beach and was named after one of the country's colonialists James Busby who employed by the Governor of New South Wales (Australia) to protect the more well behaved British settlers and traders in the early to mid 1800s. He also assisted William Hobson in drafting the Treaty of Waitangi.

Linking up with Weekend Reflections and Weekend Roundup. 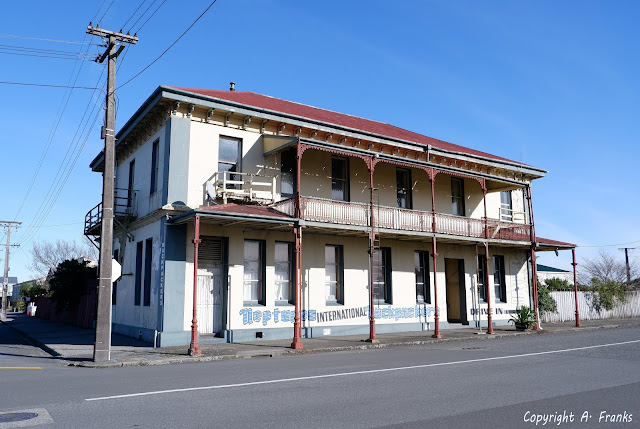 There are alot of old buildings in Greymouth but this one caught my eye while I was driving down a few side roads near town. Once owned by the Gilmer brothers it was 1 of 3 hotels in the area but this one was named as "The Brick House" or "The Gilly" because it was built out of brick and mortar whereas the other 2 buildings were built from wood. This is now used for accommodation and is named "Neptune International Backpackers".

Linking up with Skywatch Friday and Tom's signs 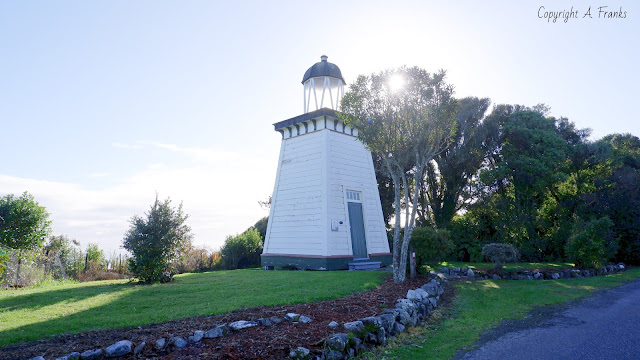 In early Winter 2 weeks ago I stopped up a side road in Hokitika to check out this icon. Named the Hokitika Lighthouse it was built in 1879 and is 1 of 14 in the country designed by John Blackett (the father of the lighthouse system). Made from Kauri it was fitted with a fifth order dioptic to burn coal from the town supply.

It is 5.4 metres high, 36.6 metres above sea level and the light is visible from 26 kilometres away. It was discontinued in 1924 as the light was dismantled and sent to Wellington. The tower was handed back to the nearby Seaview Mental Asylum's hospital department for demolition but instead was fitted out as an observation tower.

Over the years it fell into disrepair but was restored in 1999 by Heritage Hokitika Inc.

Linking up with Through my lens, Tuesday Treasures, Ruby Tuesday, My corner of the world, Wordless Wednesday.

By Amy at July 12, 2022 12 comments:
Email ThisBlogThis!Share to TwitterShare to FacebookShare to Pinterest
Labels: hokitika, hokitika history, hokitika lighthouse, my corner of the world, ruby tuesday, through my lens, tuesday treasures, wordless wednesday 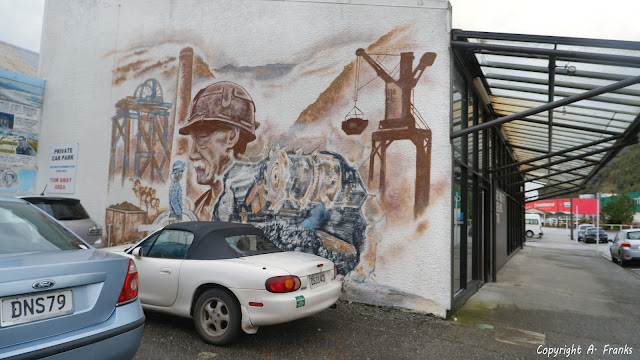 This mural is painted next to the historical one I shared recently which is on the side of a building next to the Greymouth Star newspaper. This one looks like it depicts the town's mining history but I'm not 100% sure who the artist is. 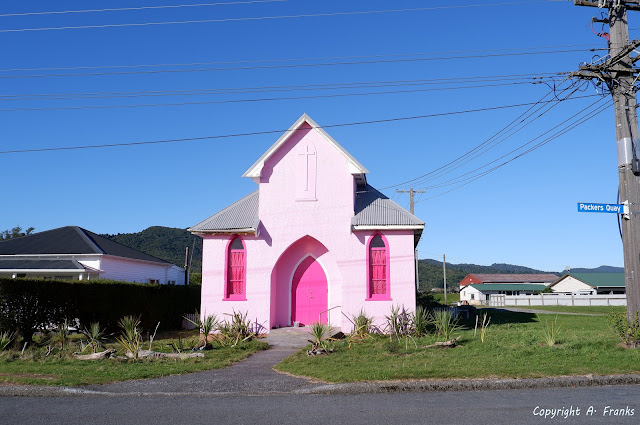 When we moved here to Greymouth we heard about a pink church in Blaketown so I did some digging behind it's story. Owned by local Sam Duckor-Jones it was once an Anglican church built in 1938 and is now a safe place for gay people - he's named it "Gloria". More photos and information about it here.

Linking up with Weekend Reflections and the Weekend Roundup. 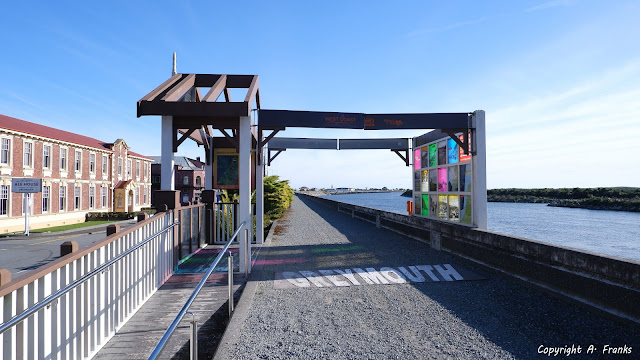 Next to Greymouth's Grey River (the main river running through town) is this cycleway which was opened in 2013 by the mayor at that time Tony Kokshoorn which ends up at Ross (about an hour away). 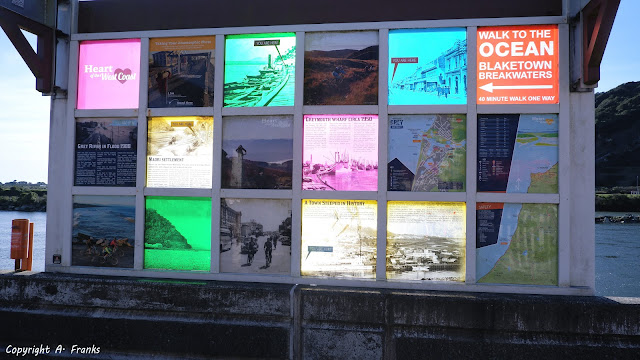 With the light shining through this porch area which looks over the river, each window shows either a fact about Greymouth or a photo with some history about different historical places. We've had such perfect Winter sunny days lately with a daily high of about 10 degrees celsius dropping to about 1 degree celsius. 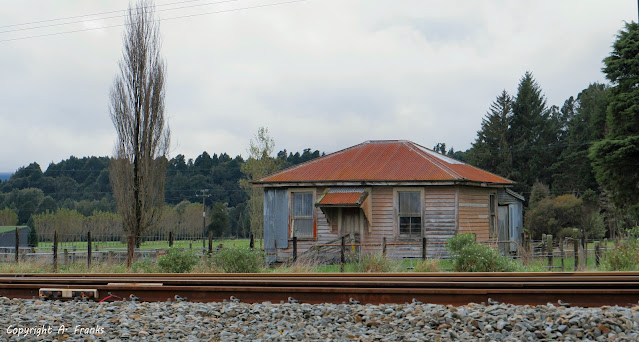 There are lots of little old abandoned houses on the West Coast, probably leftover from the goldmining days of when miners or farmers lived in them. This one is in Stillwater, about 25 minutes from town right next to the railway depot.

Linking up with Through my lens, Tuesday Treasures, Ruby Tuesday, My corner of the world, Wordless Wednesday.

A taste of Asia 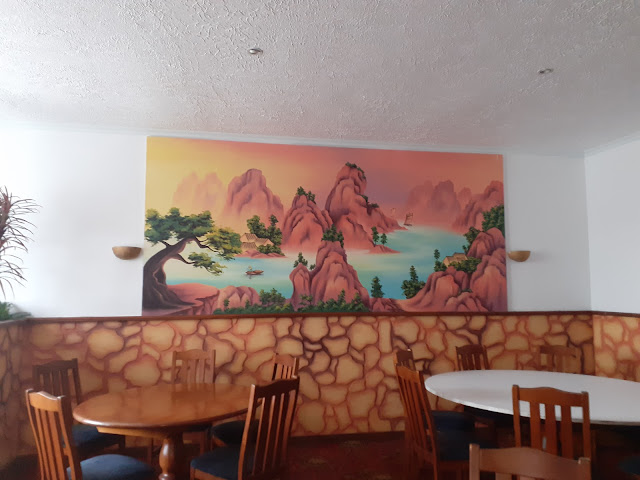 In our favourite local Chinese restaurant is this mural within the restaurant section. We usually only order takeaways from here such as lemon chicken or prawn chow mein or won tons - they make really nice food. I think it probably reflects the place where the owners perhaps come from well. 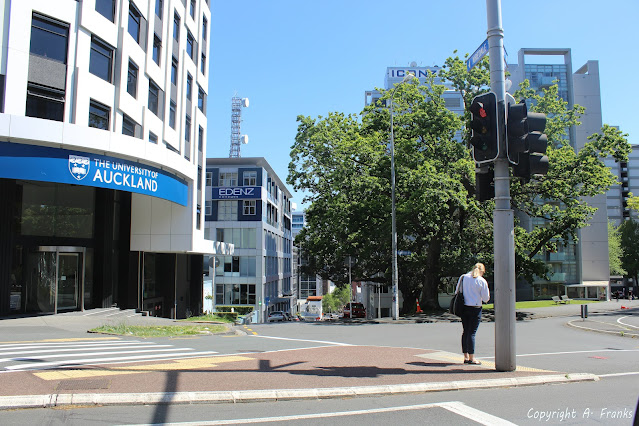 The University of Auckland is a huge campus right in the heart of the city near the top of Symonds Street. I snapped this photo while we were waiting at a set of traffic lights, I was surprised there weren't more students to be seen.

Linking up with Weekend Reflections and the Weekend Roundup.