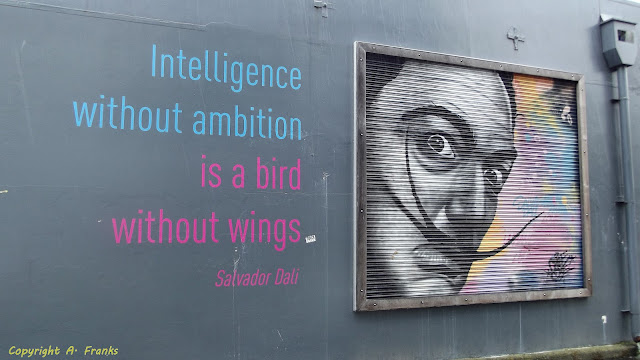 I spotted this mural of Salvador Dali on the side of a building down Butter Factory lane in Whangarei recently. His shocked sneering facial expression gets me and amuses me at the same time but the quote I think is quite true.

The mural it seems has a story; Whangarei District Council landscape architect Tracey Moore said she had driven past the mural, originally on the door of a building that had been earmarked for demolition and thought it needed to be saved. It was commissioned by one of my favourite artists, Rodrigo Rozas. 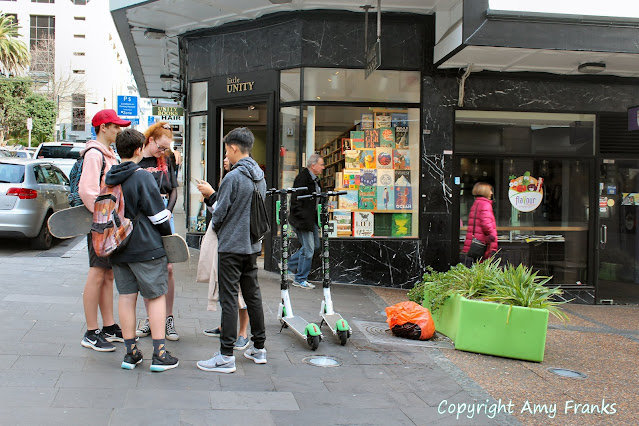 Thanks to no more lockdowns groups of people may no longer be a thing of the past. Borders here to be open to kiwis in Australia with international borders due to open too. This photo taken at the top of Vulcan Lane in Auckland City was taken over 2 years ago when life was sort of normal. 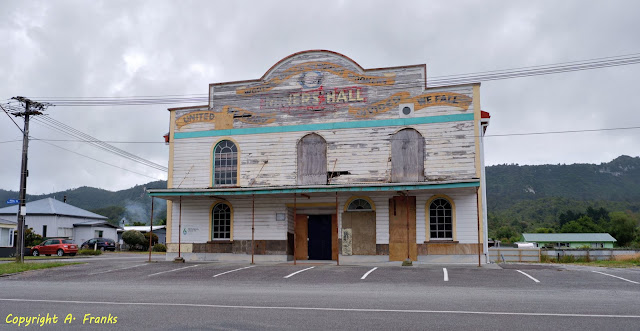 I just love this old building. Located in Runanga in Greymouth it is the epitome of old architecture (at least I think so). It was built around 1937 and replaced an early miner's hall from 1908 that was destroyed by a fire.

The west coast was mainly a coal and gold mining area. This one above hosted many many meetings during strikes. 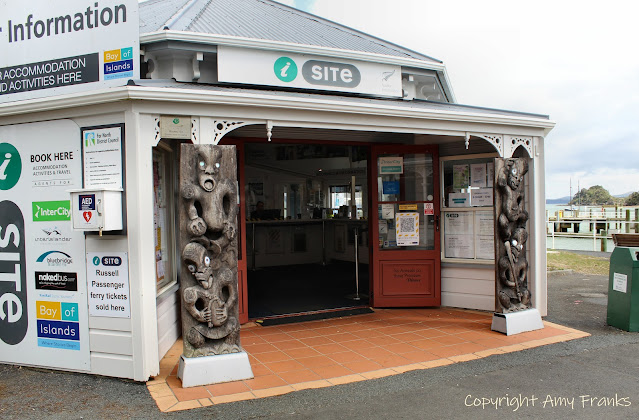 All around New Zealand we have little wee buildings that are designated as i-sites aka information places for tourists where they have knowledge on local places and businesses etc. This one in Paihia is located right next to the wharf and has a Maori carving (pou) on either side which were created by artist Tupari Te Whata from Tautoro which is south of Kaikohe. 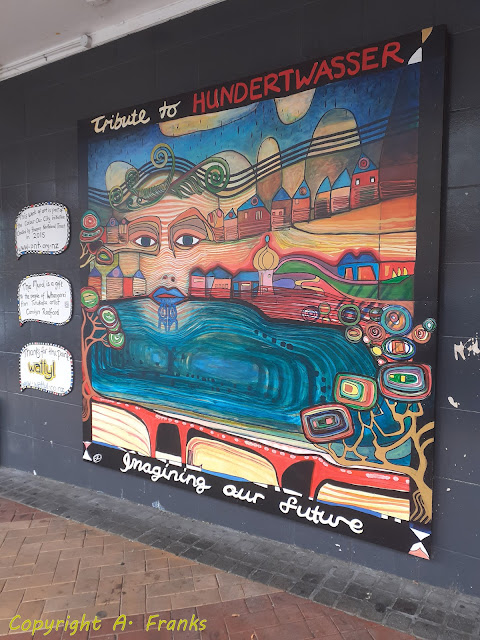 Another mural from Whangarei, this one is painted with a tribute to Hundertwusser and created by Tutukaka artist Carolyn Radford. Located in James Street it gives a nod to the Hundertwusser/Wairau Maori Arts Centre Project and the actual art centre has been quite a feat to complete. It hosts exhibitions, learning and special events - you can read more about it here. 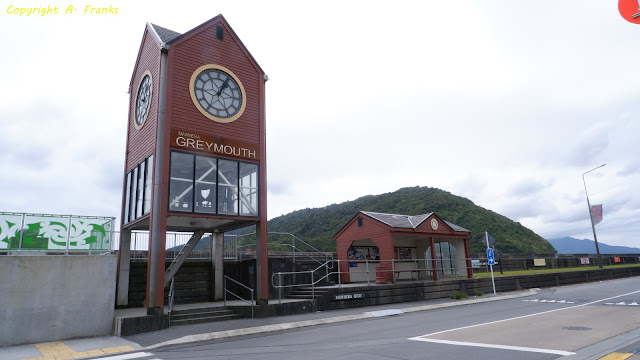 This clock tower on Manawhera Quay in Greymouth was built in 1992 right next to the railway station. In 2017 fundraising began in order to start on giving it a facelift along with earthquake strengthening. Greymouth Lions and Rotary Club raised $14,000 towards the project.

Tales from the big chair 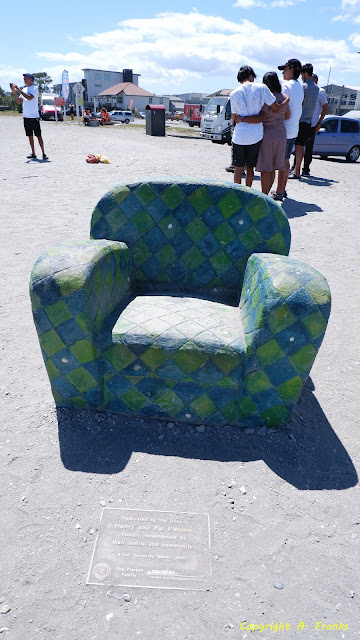 I've never seen a ceramic life sized chair quite like this one. Sitting next to Hokitika beach this one was created by artist Veronika Maser in 2005 in memory of Henry and Pat Pierson who sponsored her to create this, they are fondly remembered by their town and community.  It was good to see so many people when we visited here as the country has been pretty quiet in regards to tourism because of Covid, however I have to say that the one thing that has saddened me over the last 2 years is the amount of vile comments and bullying I've seen from anti-vaxxers etc - it's been astounding.

For the last 2 weeks there have been protestors outside parliament in Wellington who only represent a very small minority of people who are making all sorts of ridiculous demands. I just wish everyone would be more respectful of each other. 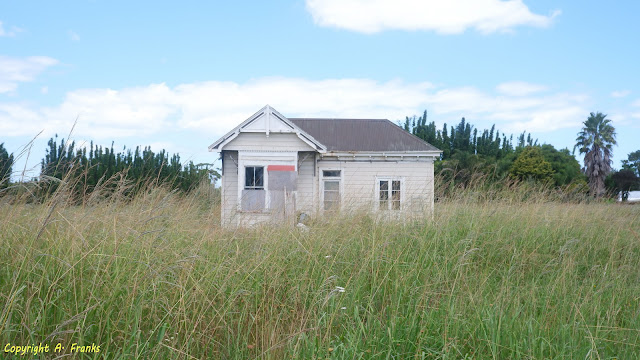 There are quite a few little old houses in the far north of New Zealand where I live. These 4 are in and around Awanui and Kaitaia. I always like to imagine their history and memories that they hold inside. 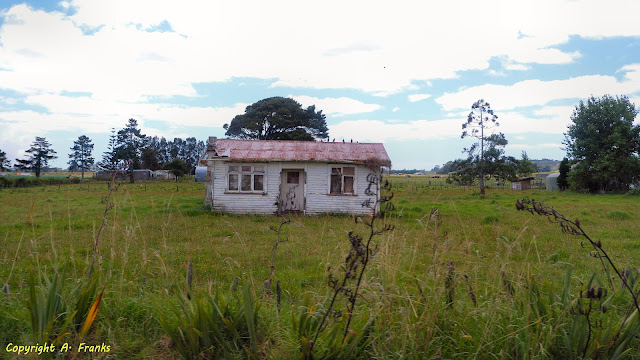 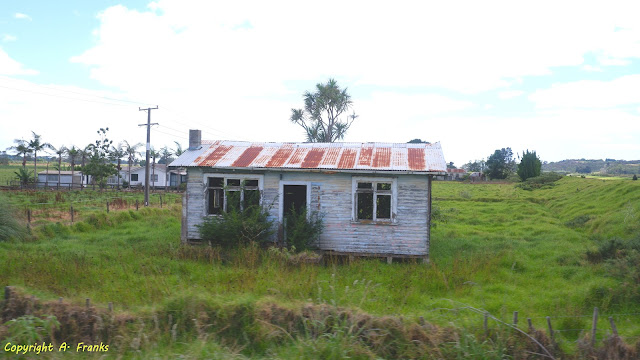 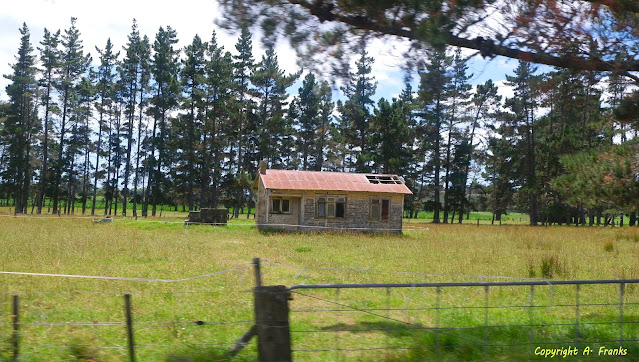 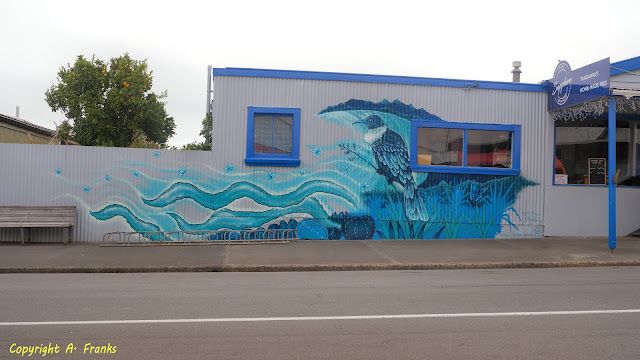 Remember this mural I posted in 2020 of  "A school of fish in Okaihau?". Well it seems that the building has had a bit of an upgrade since then.  I was in the town last week and saw that there is now a mural of a native Tui aka Bellbird painted by Kayla Oceana and Brooke W who are part of The Ocean Mind Project .

Their goal is to empower the Bay of Islands community with knowledge and choice, to protect our environment and to begin with think consciously about usage and waste in regards to people recycling instead of using plastic. 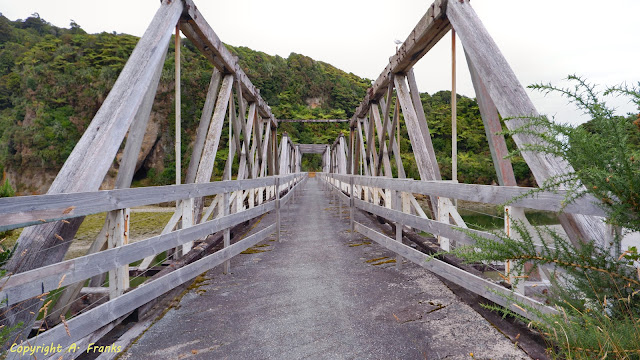 Another one from the West Coast. While we drove through the Punakaiki Coastline we stopped at the side of the road so I could take photos of the old Fox River Bridge. 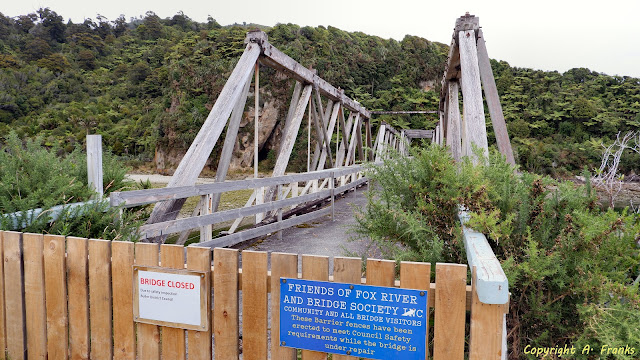 Although it's now closed for safety reasons I did a bit of digging into it's history. Apparently it was built around 1930 to cater for the growing gold mining industry which started in the 1960s. Nearby is a cave walk which is popular for cyclists and hikers that takes about 3 hours. 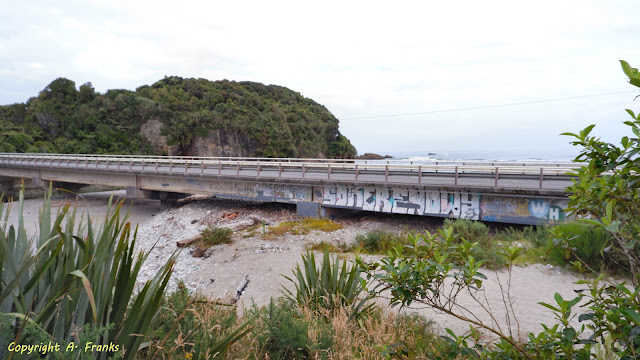 This new Ngakawau bridge from what I've found out was built around 1988 and is made of concrete/steel etc and is alot more safer especially with the flooding that can occur in this area. I like the old one though, i think it has more character.

Red chairs in the rain 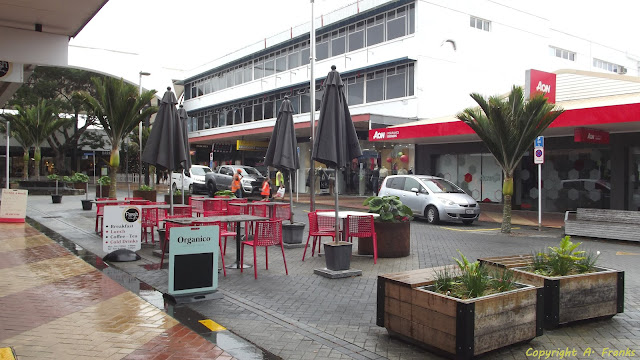 One from Whangarei taken the week before Christmas 2021. I like to walk down little side streets and alleys off the main roads. This one I took while it was raining as I stood under a shop's front cover, I particularly like how the red chairs link in with the AON Insurance building next door. 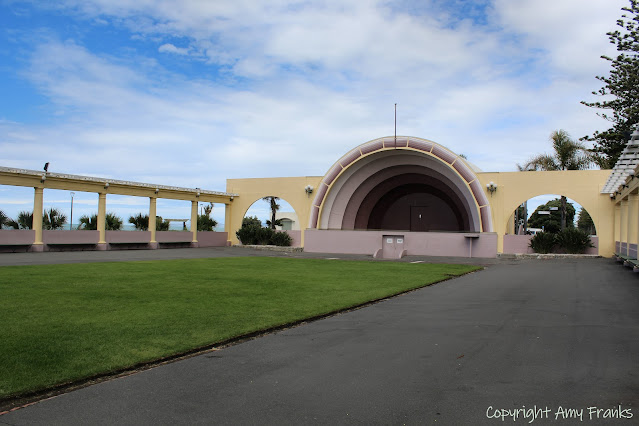 Napier has alot of really strong art deco architecture mostly because the city was flattened during the massive earthquake they had in 1931. When we were there in April 2021 I took advantage of all of the beautiful buildings by taking loads of photos. This structure is known as the Soundshell which is these days available for organisations to hire as a stage setup and performance area. 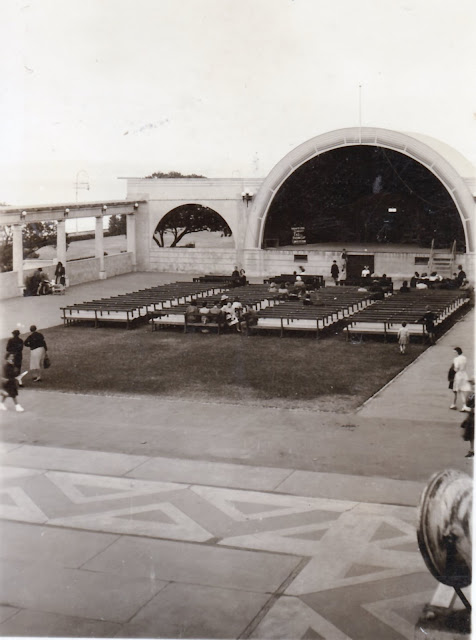 It was built in 1935 and designed by Napier architect J.T. Watson. The art deco sound shell was the first to be built in the country and it trumpeted the city's intention not just to rise from the rubble and ashes of the earthquake and fires but to reinvent itself in the process. Information from the city council website. 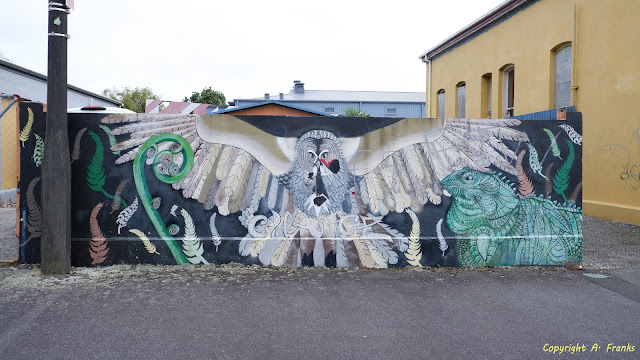 I really like this mural that we saw in Westport while we were there. As pretty as it is I am unable to find out who the artist is. The word along the bottom says "change" and it's accompanied by some fern leaves, a fern frond, a little owl and a tuatara. 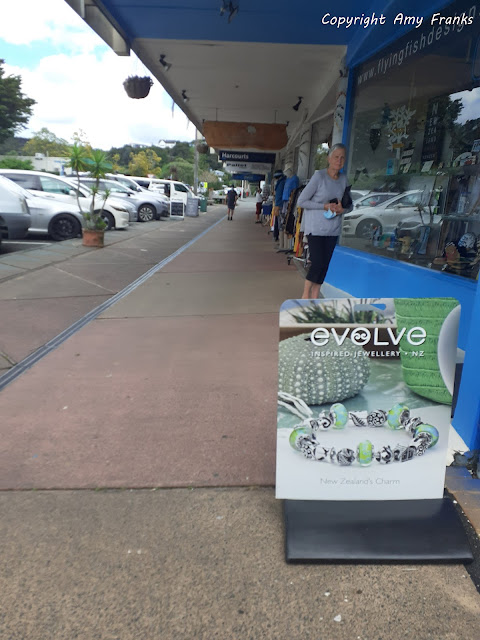 I didn't enter this shop in Paihia last time we were there just before Christmas in December but I did check out their website. They make and sell jewellery that gives a nod to native New Zealand, our beaches and coasts, the night sky and a birth stones collection etc.

Linking up with Weekend Reflections, Tom's Signs  and The Weekend Roundup. 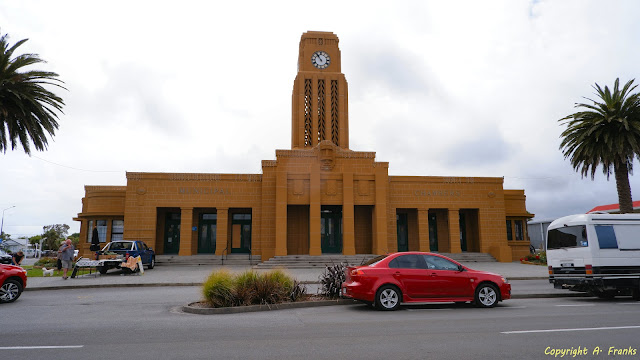 One from Westport on New Zealand's West Coast. This iconic building in this town is glowing in Motueka Sand and was planned to be the local town hall. This one was built in 1941 but the original one was built in 1873 after coal started flowing out of the port and the town began to grow but the materials used back then which was roughsawn timber and corrugated iron were not going to last into the next century.

The local council then commissioned this building possibly designed by architect Archibald MacDonald) during a period of depression in which the war then followed. Sadly it still goes unfinished despite a public funding campaign that was started in the 1960s.

So yesterday my 2 adult children and I had to get covid tested. Sigh, long story. They both work full time at McDonalds, apparently last week it was a place of interest where a positive case had been. 2 of their co-workers have tested negative but late Tuesday afternoon the 3 of us started feeling under the weather....sore throat, headache, snotty nose, feeling lethargic. So we are all waiting for our results to come through and unfortunately it's put a spanner in the works with us being able to work. We're staying home and isolating to be on the safe side but fingers crossed we test negative too. If we all weren't triple vaxxed I dread to think how we'd be feeling...EDITED TO ADD: our tests came back negative. 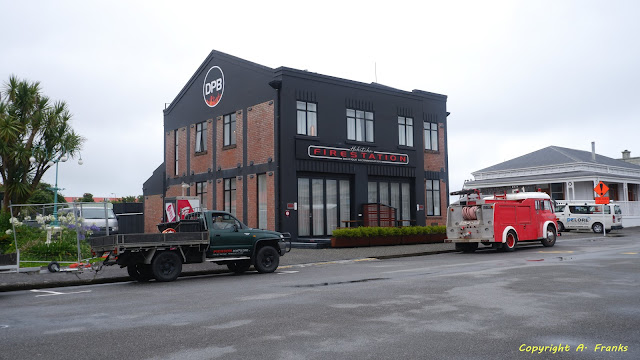 Down one of the main streets in Hokitika is this gem. The Old Hokitika Fire Station has been made into boutique accommodation consisting of 5 apartments. Apparently each of the apartments is named after a fire chief who once lead the brigade which I think is a nice nod to it's history.