Signs of Autumn at Kawakawa

Autumn skies and scenery at Kawakawa Bay where the tide was out. This lovely place is about 45 minutes south of Auckland central on the coast just before Orere Point.

You know Summer is on its way out when my sinuses and hayfever allergies start playing up...right about now.

Views over Paihia beach and coastline

Cyclone Oma didn't reach us too bad in the end, about all we got was some rain and that was about it and it looked like it was heading towards Australia's Gold Coast. So we are back to our late Summer changing temperatures. I'm one of those people who can't stand humidity and heat, I prefer it cold but there's still plenty of sunshine here along with days where the air conditioning doesn't need to go on anymore and we don't have to kick off the blankets at night.

However I've noticed that it's the start of pear and avocado season. Avocados can be quite expensive at times, we bought 2 this morning at $3.50 each - maybe I should plant a tree because I love them so much.
By Amy at February 24, 2019 12 comments:
Email ThisBlogThis!Share to TwitterShare to FacebookShare to Pinterest This is where we take our boat, out at Opito Bay a favourite place of ours. This is the other half's work ute launching it off the boat ramp. This week we have rain which is sorely needed here, so many people who live rural and have huge 10,000 litre tanks for rain are starting to nearly run out and farmers need their grass to grow for cattle. We have a cyclone forecast for this weekend but at this stage we don't know whether it's heading for us or Australia. Either way I"m sure it'll bring some much needed relief.

The secret world of fungi

Along the Rainbow Falls River walk is this trail, it's about 5 minutes walk in. What I liked about this particular spot was the gnarled tree trunks and roots. Who knows how long they've been growing there for or what stories they could tell about what they've seen over the years?

On the outside of one of these trees was some funky thing growing out of the trunk. I'm not 100% sure if it's fungi or some parasitic disease. I still have to narrow that down. I do hope it's a fungi, if we have the latter growing in our native forests then there is a danger that in the future we will have less and less of the things that make NZ special and unique.
By Amy at February 19, 2019 13 comments:
Email ThisBlogThis!Share to TwitterShare to FacebookShare to Pinterest

It's a day for Dolphins 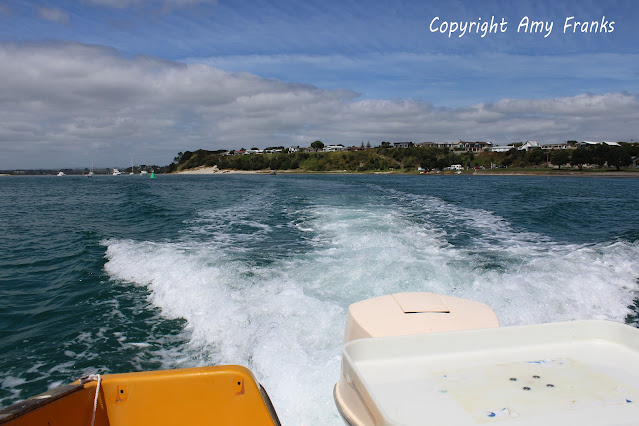 Today we were out in our boat after an absence of about a month or so. The forecast was for 20 knot winds and when we woke up this morning all was still in the air and the sea looked like a mirror but once we were out on the water the clouds came out and the wind came up.

After moving around different places trying to get bites while avoiding the choppy high waves and me feeling very sick (normally I don't get seasick) we finally stopped in once spot behind one of the islands.

We lost our berley twice, the 2nd time we let it go but this little bird seemed to find us fascinating. If you can see him he's brown with white feathers and was loving the little scraps of bait we were throwing out. Apparently he's a Fluttering Shearwater bird also known as Pakaha/Puffinus Gavia, feeds on small crustaceans and krill. They breed on offshore islands around the North Island and Cook Strait from September to February before migrating to Australia.

While we were out there we happened to witness a pod of about 30 dolphins chasing a school of Kahawai around us and 2 other boats that we were also out on the water. Just amazing to see these beautiful creatures.

Another subject - Valentines Day - did you celebrate it? We didn't and don't normally. Baz and I have been together nearly 4 years and we do things for each other throughout the year so we don't see that one day is really needed.
By Amy at February 17, 2019 9 comments:
Email ThisBlogThis!Share to TwitterShare to FacebookShare to Pinterest

Another local waterfall (I think there are 8 in total) we've discovered on our treks around this area is this one - the Kerikeri River Falls Track.  This one is near the Stone Store and took us about 20 minutes in total to walk there, very pretty and quiet considering it's so close to town.

Back when we lived in Tauranga we use to regularly see this wee boat cruising the harbour with passengers. A few times I wanted to go on it but life got in the way.

Not be confused with Northland's Kewpie Too, this baby "Kewpie Cruises" has a licensed bar, 2 levels, a lounge bar and a dance floor - it almost doesn't quite look like it has that much room from the outside.

Speaking of boats we haven't been out in ours much lately, over Summer there were too many people out there also fishing so we are waiting for the tides to be right. We think that around mid to late February it might be time to get out there again.

Linking up with Our World Tuesday.
By Amy at February 12, 2019 9 comments:
Email ThisBlogThis!Share to TwitterShare to FacebookShare to Pinterest
Labels: kewpie cruises, kewpie too, mount maunganui, new zealand, tauranga

Near Kerikeri's Stone Store is this historic gem - the Kororipo pa site was once occupied by some of the Hongi Hika and Rewa's people (Ngapuhi) in the 1820s. This was once a stockaded fortress and used as a port to collect shellfish, seafood and a place to store  their canoes.

This area was previously occupied by another tribe called Ngati Miru until they were attacked by the Ngapuhi.

Kororipo - meaning Waha-o-teriri (mouth of war) is now under the protection of NZ's Department of Conservation and it is a popular tourist spot.

Hongi Hika and his people left Kerikeri for Whangaroa at the end of 1826 and after being hurt in battle in 1827 died in 1828. In 1830 Rewa and his people left Kerikeri to live at Russell then Kororipo became deserted. Rewa sold 7 acres to James Kemp in 1831 to become part of his farm and mission station and in 1838 the remaining 6 acres were also sold to James Kemp by Hongi's sons Hongi and and Puru. This 6 acres was gifted to the nation by E.S. Little in the 1950s.
By Amy at February 10, 2019 11 comments:
Email ThisBlogThis!Share to TwitterShare to FacebookShare to Pinterest
Labels: hongi hika, james kemp, kerikeri history, kerikeri stone store, kororipo pa, new zealand history, ngapuhi, ngati miru, northland history

Along the Matauri Bay coastline is this gem of a beach....Wainui Bay which is a tiny beach surrounded by a handful of holiday homes and baches. So quiet and peaceful - I can understand why someone would want to be here.

Today is Waitangi Day here in New Zealand. As a nation we celebrate the day the treaty was founded which was an agreement made between representatives of the British Crown and more than 500 chiefs in 1840. This house belonged to James Busby, who co-authored the treaty with William Hobson has been well restored and is on the Heritage NZ list as a category 1 listed building.

The treaty however had different connotations and meanings for both Maori and European back then and from what I've come to know is that many chiefs did not truly understand the ramifications of what they were signing. It was created to be an agreement between both cultures and to bring the country to unity, however many breaches of it by different governments over the years have caused anger and strife - the more I've learned the more I've understood why many people are up in arms over it.
By Amy at February 06, 2019 7 comments:
Email ThisBlogThis!Share to TwitterShare to FacebookShare to Pinterest
Labels: james busby, new zealand history, paihia, treaty of waitangi, waitangi day, william hobson

If this photo looks a little bit lop-sided it's because this little old church in Whangaroa was up the top of a very steep driveway near the top of a hill. I struggled to walk up the path and when I did I had to steady myself with a small tree nearby.

St Paul's Anglican Church has been in this spot for approx 125 years and when it was opened in 1883 people came by boat or walked for miles to get to the services. St Paul's has quite a history; it's witnessed the slow decline of the timber industry, a fire that burned the school that was originally in front of it and the building of the Whangaroa big gamefish club rooms and marina.

An Oyster Farm in Whangaroa


This morning we drove out to Whangaroa and enjoyed another nice lunch with the other half's cousin at the Marlin Hotel. On the way out we stopped on the side of the road so I could take this photo of an oyster farm out in the harbour. 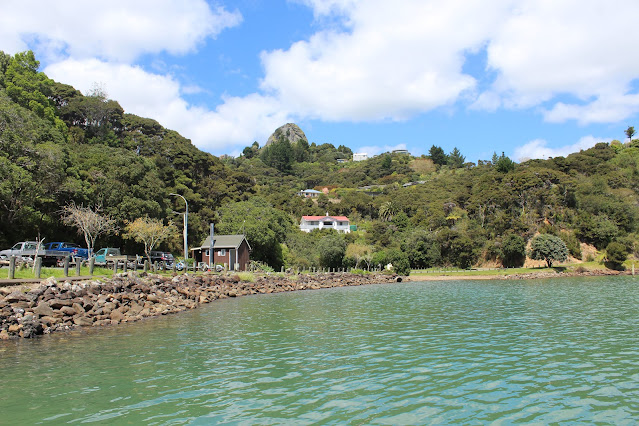 Do you like Oysters? I love them, in fact I'm a huge seafood fan I prefer them raw but the other half likes them battered and fried but to me that takes the natural ocean taste out of them.
By Amy at February 03, 2019 11 comments:
Email ThisBlogThis!Share to TwitterShare to FacebookShare to Pinterest
Labels: far north, marlin hotel, new zealand seafood, northland nz, oyster farm, whangaroa harbour

Over the Matauri Bay coastline

One of our little road trips we stopped at the top of the Matauri Bay hill and looked over a farmer's fence towards the coastline to where we could see the Cavalli Islands in the distance - apparently it's all meant to be great fishing out there.

It's the end of my week tomorrow and the end of a 6 day week, we are thinking about where to drive to this weekend...