Catch of the day

After a month or so of having a break from our boat we ventured out today. Was a bit slow in places and we moved around a few times but in the end after 5 hours on the water we ended up with these babies. 1 John Dory which is a lovely tender fish to eat, a Scarlet Parrot fish - again good eating, and 4 Snapper which are lovely pan fried after coating in flour, egg and breadcrumbs.

Visitors in the garden

Every morning the other half puts a line of breadcrumbs and any rice leftovers we have on the grass at the back of our garden. He's had to be careful about where he puts them because we use to get greedy seagulls coming over making a mess on peoples roofs and creating lots of noise. At one point we found a letter in our letterbox from one of the neighbours asking us to be careful which was somewhat amusing.

Each day it seems we have regular visitors. The photo above this is of a male Tui who sits high at the top of our neighbour's palm tree singing for a mate, each time I go to grab my camera he flies off so I've had to be really quick. This one above is one of 3 thrushes that come up to our bedroom ranch slider when we first get up. They stand there and look at us as if to say "hey, where's our breakfast" - they seem such friendly things.
By Amy at April 27, 2019 9 comments:
Email ThisBlogThis!Share to TwitterShare to FacebookShare to Pinterest 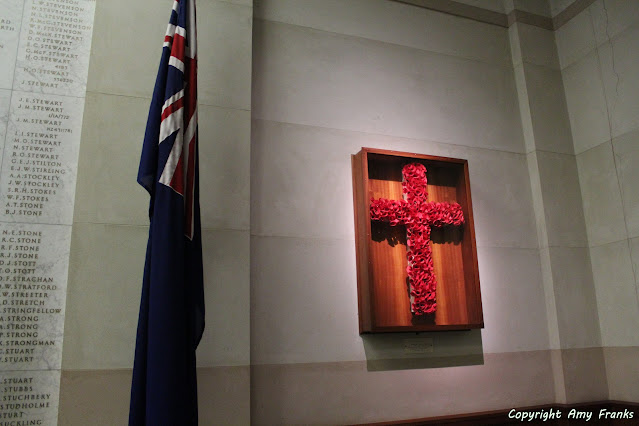 ANZAC - meaning Australia New Zealand Army Corps. A day us kiwis take each year to remember all of those who fought and died for us in all of the wars our countries have been involved in. It's particularly a day we remember the troops landing in Gallipoli in 1915.

One of my favourite things to do at any beach is look for rockpools. This one, one of many at Rangiputa had lots of life in it. These limpits seem to have been attacked by birds by the look of it and after googling some more information about them I've learned that they are aquatic snails that are members of the Gastropoda family.  Apparently they live on bits of algae and these ones are a species called Patella Vulgata.

Linking up with Our World Tuesday.
By Amy at April 23, 2019 16 comments:
Email ThisBlogThis!Share to TwitterShare to FacebookShare to Pinterest
Labels: limpits, our world tuesday, rangiputa beach, rock pools, sea creatures

I've been passed this place many times while driving through Paihia but never actually stopped until recently. This is one of the more popular restaurants in the area - Zane Grey's overlooks the harbour and wharf. It not only has a restaurant and bar but also apparently has an aquarium inside.

The restaurant was named after a local legendary fisherman Zane Grey. He first visited NZ in 1926 and caught some large fish such as a Mako Shark. He established a base at Otehei Bay in the Bay of Islands which became a destination for rich and famous people. He wrote quite a few articles for international sporting magazines about fishing and also held numerous records a hookless bait that is still used today to attract fish. 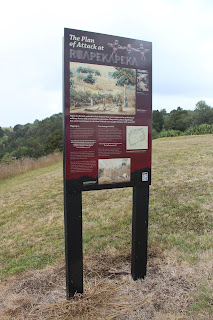 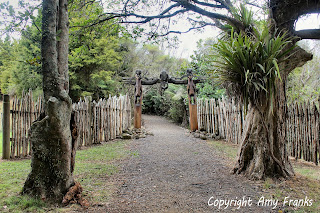 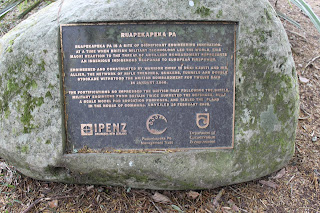 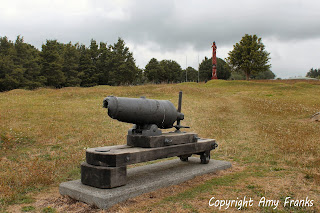 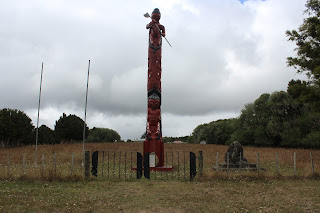 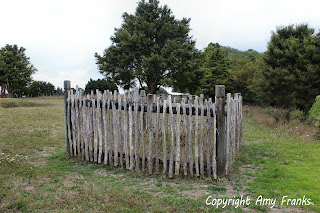 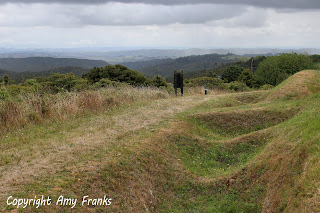 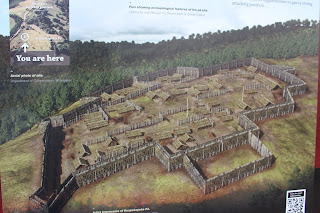 A couple of weeks ago B and I wanted to go exploring but didn't want to travel far so we ended up at Ruapekapeka Pa just outside of Kawakawa, about 30 minutes away from home.


This area is one of the largest most complex pa sites that was designed to counter the cannons of the British Forces in the last battle of the Flagstaff War by the Ngapuhi lead by Hone Heke.


The new British governor failed to end the war by negotiations so the Colonial forces lead by Colonel Despard assembled 1,168 men in the Bay of Islands to deal with the Maori warriors. They began a 2 week advance over 12 km to bring artillery to the Pa.


The siege continued for 2 weeks then in the morning of 11 January 1846 a William Walker Turau discovered that the pa appeared to be abandoned. A small group of British forces entered the pa and found it almost empty. The remaining Maori left tried to re-enter from the back entrance but withdrew after a 4 hour gunfight.


One of the entrances to a tunnel has been fenced off here so people don't fall in. The maori had a deck cannon (used for a ship) and a field gun. It was rendered useless though after it was hit 3 times and due to a limited supply of gunpowder the guns weren't able to be used much.


The pa was named Ruapekapeka (meaning bats nests) because of the tunnels and dugouts that still exist today. The caves underground could accommodate 15-20 warriors that had circular entrances at the top.


Later on after examining the Pa site it was found that it had been very well designed and strongly built. Reasons as to why the Maori had abandoned the site and then tried to re-enter it have been debated over the years. People have suggested they were at church as many of them had converted to Christianity. Knowing that the British were also Christians they had not expected an attack on a Sunday.


One of the Maori customs was that where blood was spilt that place became Tapu meaning sacred so the Ngapuhi left the Pa and carried their dead back home.

Last week was the anniversary of when we first came up here to Kerikeri on holiday. A month or so later we decided to move up here and it was one of the best decisions we've ever made. No more hectic city traffic, no more noisy noise - now we have more relaxation and quiet. Living in a small town really does suit us better.  I remember us seeing lots of Monarch butterflies and a few days ago I saw this rather fat caterpillar on our neighbour's Swan plant on the edge of the footpath, I bet if I go out there now he's probably hanging from his chrysalis.

Yesterday before I started work I cleaned out our vege garden. The spinach I planted last Spring is still going strong and the Calendular and parsley plants have all self seeded. I bought some beetroot seeds and Chives seeds online so those were planted in various spots. We seem to be using herbs alot more especially in cooking so think I'll have a looksie at what else I can buy. Any ideas?
By Amy at April 14, 2019 9 comments:
Email ThisBlogThis!Share to TwitterShare to FacebookShare to Pinterest

At Tauranga's Te Puna Quarry Park Gardens there is one wooden carving I've never really thought much about. This one entitled "stand" was created by local artist John Roy overlooks the Bay of Plenty coastline from the top of one of the hills.

He has been quoted as saying "My work revolves around iconic forms, social memory and what people bring to to the piece or their knowledge of that form. I introduce my ideas and thoughts in a way the viewer can relate to or interpret comfortably. Yet maintain my social, political and aesthetic intentions for the work. In effect to provide enough information for the for the viewer to draw upon their own personal experiences to tell their own story".

To me it almost shows a person standing looking out over the overall view and landscape of the area. What do you make of it? 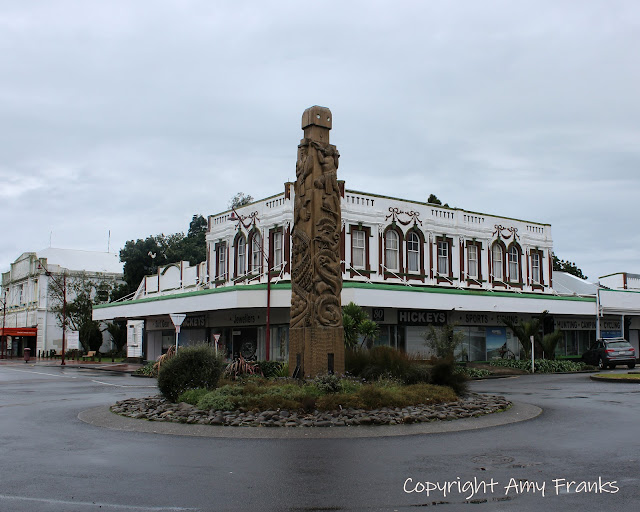 This rather impressive carved pou (post) sits in the middle of one of the main streets of Opotiki in the Bay of Plenty. Apparently it represents a variety of activities from the 19th century settlement of the town including including agriculture, horticulture and trading.

Behind the carving is a historical building known locally as the Old Bridger's Building and was once a drapery store. Over the years it has been used as a government office building, for education, dental surgery, factory workshop and a restaurant/cafe.  These days there is a small mural on one side and a jeweler's on the other side but there are various buildings in this town that look just as empty and unused.

Linking up with Our World Tuesday and Wednesday Around the World.

In the shopping area of Tokoroa is this mural on the side of a bakery shop. In 2010 the outline was painted by urban artist Lady Diva and the colour was added by the hand prints of many South Waikato residents.

This mural was part of 5 others that were painted around the country in an effort to stamp out untidy graffiti - looks like it worked because it was still there when we visited in 2018.
By Amy at April 06, 2019 8 comments:
Email ThisBlogThis!Share to TwitterShare to FacebookShare to Pinterest
Labels: charles janine williams, lady diva, murals, new zealand art, tokoroa

We were out at Ruapekapeka Pa a couple of weeks ago and this farming scene caught my eye.

Out in rural NZ this is a common sight. Many people use empty containers like sheds to store farming equipment in. Parking a tractor on the hill next to it is a wise move especially if we get lots of rain. 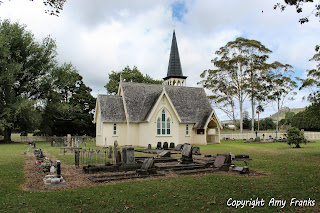 Recently on a drive home from Paihia we took a different route than we normally take and stopped to explore this church in Pakaraka. 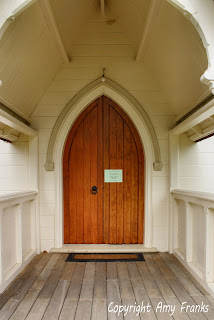 The Pakaraka Holy Trinity Church was built around 1850-51 by missionary Henry Williams and was opened in 1873. 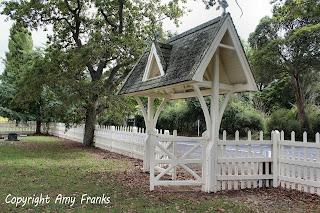 The first and third sons of Henry and his wife Marianne farmed here in this area for many years. I don't know about you but those stained glass windows are awesome are they not?

Henry was the leader of the Church Missionary Society mission in NZ in the first half of the 19th century. He entered the royal navy at 14 years old and came here in 1823. The Bay of Islands Maori people gave him the name Karu-wha (meaning four eyes) as he wore spectacles but he was known more widely as Te Wiremu (Wiremu being the maori form of William).

The church and entrance (as above) are gothic in style, there is a slim steeple and the original tower apparently blew down in 1946 but was replaced in 2001. Henry's best tribute was in 1867 on the day he died 2 local tribes had planned a battle to settle a land dispute.

The old man's well respected mana (meaning power) that when the warriors heard the news both sides put their weapons down and joined the mourners.

I was out in the little town of Ross last week with B while he was working and this is where we ended up taking photos of the historical bu... 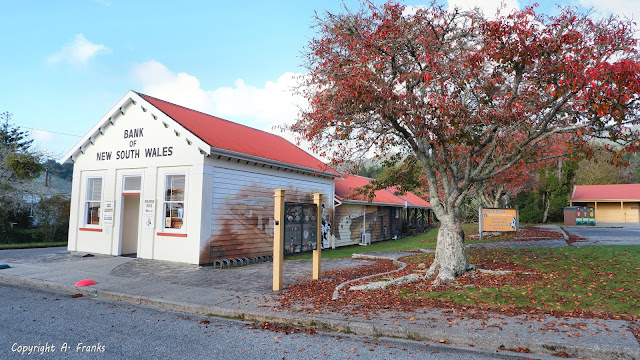