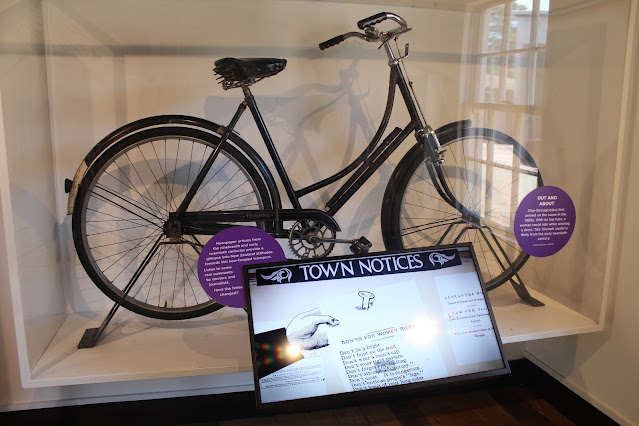 Loving this old bicycle on display at MOTAT in Auckland. The signs in front of and on it say this - be prepared to be amused:

don't faint on the road

don't coast - it is dangerous

don't boast of your long rides"

"Step through bikes first arrived on the sene in the 1880s. With no top tube a women could ride while wearing a dress. This triumph model is likely from the early 20th century".

Oh how times have changed...

I remember women riding bikes like that when I was a kid.

My sisters had bikes like that back in the 60s.

Don't they still make bikes like that? So much easier to get on.
Love all the advice

There's a lot of history in that bike. I always did wonder why a woman's bike did not have a cross bar. Finally after all of these years I finally know why.
ۜ\(סּںסּَ` )/ۜ

It must´ve been tough! A tool kit would be no use for me. Two left hands.
Times sure have changed. I have a boy´s bike from the hardware store (the girl´s version was of more weight, crazy!).

The best transport ever!

Those were the days (says he who can remember the days of heavy old bikes).

I love this but now I want to know what a "century" is.

Oh yes have changed immensely. I finally got an new bike early last year. I was having trouble dismounting from the bike I had. The salesman suggested a "step through" model and I tried it and loved it. He said lots of "older gentlemen" ride them. So this older gentlemen is loving his girls bike.

F's still got a bike like that (among the various she owns) - for going shopping and riding round 'Art Trails' and poncing about with her trendy arty friends (in UK). Trendy arty types here don't ride bikes. The don'ts are abit preachy aren't they. I wonder if they were written by a woman ....

I really do not know why there was a cross bar on bikes anyway. Woman do not have them and the bike works perfectly! Love the old photo. Have a lovely week ahead