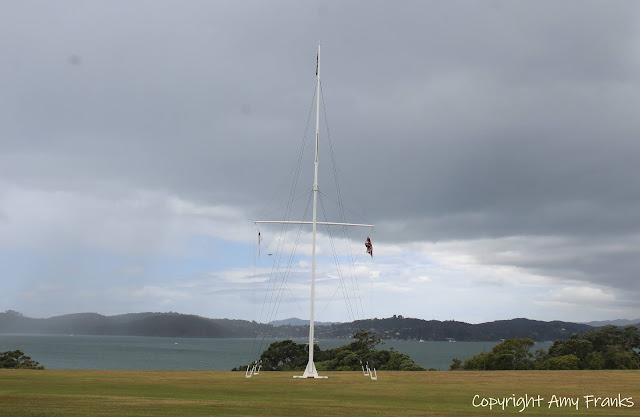 See this flagpole? Looks kinda boring right? Well this flagpole has an important history to our country. Located in Paihia on the Waitangi Treaty Grounds it marks the spot where the treaty was first signed on 6th February 1840. The flags that fly today are the 3 official flags that we have had since 1834 - Te Kara (the flag of the United Tribes of NZ), the Union Flag (from 1840 to 1902) and the NZ Flag (from 1902 to present day).

The first flagstaff was gifted to James Busby by Ngapuhi chief Hone Heke Pokai. This was later shifted to Kororareka (Russell). In 1834 a flagstaff was erected by the Royal NZ Navy, replaced in 1947 and the Navy remains the caretaker of the current one to this day.

New Zealand's first flag was chosen at a meeting of chiefs at Waitangi on 20th March 1834 to ensure that ships built and owned by people in this country would be recognized by other nations.  British resident James Busby invited Maori leaders to choose 1 of 3 designs for the flag which later became known as the flag of the United Tribes of NZ (Te Kara of Te Whakaminenga o Nga Hapu o Niu Tireni).

Britain's acceptance of this flag showed the country was now internationally regarded as an independant nation and started a drive from James Busby to form a government. The Declaration of Independance was created in 1835 followed by the Treaty in 1840.

Linking up with Our World Tuesday, Tuesday treasures, Through my lens, Wordless Wednesday, My Corner of the world.

First time I've seen a flagpost with three flags. I hope you have a healthy and happy 2021.

An interresting story, for sure.

You ought to shre photos of the 3 flags - fascinating.

Interesting story and history behind the flagpost.
Thanks for sharing.
Wishing you a happy, healthy and peaceful 2021.

I enjoyed the fascinating story and history behind the flagpost!

May this year bring new happiness, new goals, new achievements, and a lot of new inspirations on your life. Wishing you a year fully loaded with happiness.

Sometimes this is better than a huge statue, right?

...preserving history is so important, thanks Amy for sharing. Take care and have a wonderful day.

New Zealand fascinates me. I would love to visit there.
Thanks for sharing this photo and the explanation accompanying.
I wish you a wonderful 2021 - and hope it will include time without masks and lots of hugs.

That's a lot of history packed into this one small spot. It's a beautiful spot too!

It's just 10 years since I stood in front of that flagpole and then posted about Waitangi. How time flies. Thank you for the reminder.

lol, it does not lookalike a flagg pole. I see a mast on a ship :)
Taek care, and Happy New Year to you.

Great article Amy. I visited there last year but didn't realise so much history was attached to the flags. It was fascinating reading about them.

Thanks for the photo and history.

A fantastic addition to 'My Corner of the World' this week! May the new year bring you great things to photograph!

I always appreciate how you share your knowledge of your country’s history and it is very encouraging that it seems honor and respect have always been granted to your First People, the Maoris.