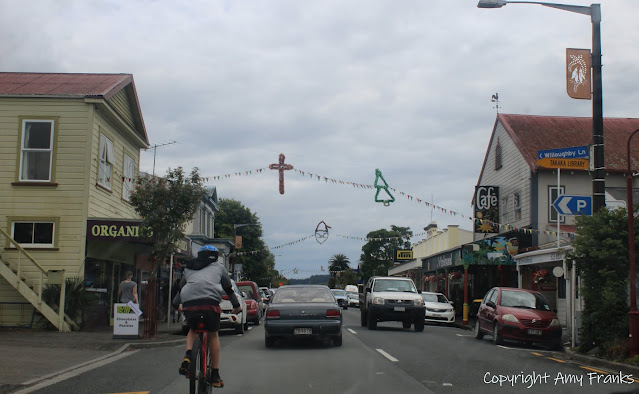 It's nearly been a year since we were in Nelson looking around each area to see if we wanted to move there.When I first visited there in 1981 I was 10 years old - I had travelled down there by plane with my nana and grandad to see my aunt and cousins for a week. Back then the Nelson region was alot smaller than it is now - this time it had grown considerably and it was obvious that it was on it's way to becoming the next Auckland. Many people are moving out of the major cities to buy cheaper properties elsewhere around the country, however the average house price in Nelson is just about what you would pay in perhaps Wellington or Whangarei.

On the 2nd to last day of our time away we drove through Motueka and really liked it. It's just over 30 minutes out of Nelson and although there were quite a few shops and businesses there it had a sort of small town feel to it. As we drove through the main street of course I had my camera in hand so I could take any on the go photos and this one caught a few street decorations that were up here and there along with residents going about their daily lives.

Although we didn't end up moving there, B's sister and her family live there so we will definitely be going back at some point for a visit.

Linking up with Our World Tuesday, Through my lens, Tuesday Treasures and My Corner of the World.

By Amy at December 01, 2020
Email ThisBlogThis!Share to TwitterShare to FacebookShare to Pinterest
Labels: motueka, my corner of the world, nelson, our world tuesday, through my lens, tuesday treasures

My father came from near Motueka and still has a bit of family there. We visited once many many years ago. Really is a beautiful area.
So is the north where you are now!

Pretty cool. Sometimes I think all the great places in the world are getting swamped.

Sounds like a slow and easy place to live, but not too far away from the services offered in a bigger city

They look large decorations strung across the street.

The scene looks like it could be the Main St in the nearby town here. The small towns are nice, the street decorations look pretty. Take care, have a happy new week!

When I took the photo it was in the 2nd week of December so it was a bit closer to Christmas then.

I haven't been there for years but loved the whole area.

sounds relaxing and a nice area

I love Motueka and the Tasman Bay. Di you go over the hill to Collingwood while you were there? The marble formations at the top of the Takaka Hill (around Harwoods Hole) are a great photo opportunity.

Yes we did but it was such grotty weather and lots of road works so we didn't stop a whole lot.

I like this kind of towns, gives me a sort of "homefeeling" :)

...few if any areas stay the same, it's hard to stop change!

I have relations living in this area so have been here quite a bit. Motueka is a lot bigger now than it used to be, but still a lovely town.

I loved Nelson and have been there quite a few times and, on occasion, have visited Motueka. Considering that my New Zealand 'home' was Napier (which is hardly the centre of the universe), I felt that Nelson (and, therefore, Motueka) were far too far off the beaten track to live. Home is where one is comfortable I suppose.

Amy that looks like a very homey neighborhood! It's like the ones I see in movies in America on quiet downtowns but still looking full of life!

It many years since I visited Motueka, I remember thinking the area was lovely. Love your photo of the Christmas decorations.

What a lovely town!

Nice to have a place like this to visit Amy, I love heading out to visit country towns ✨

Most of the places I go are the small towns and it's definitely a good feeling to be in the little places at Christmastime.

It's great to see your link at 'My Corner of the World' this week!