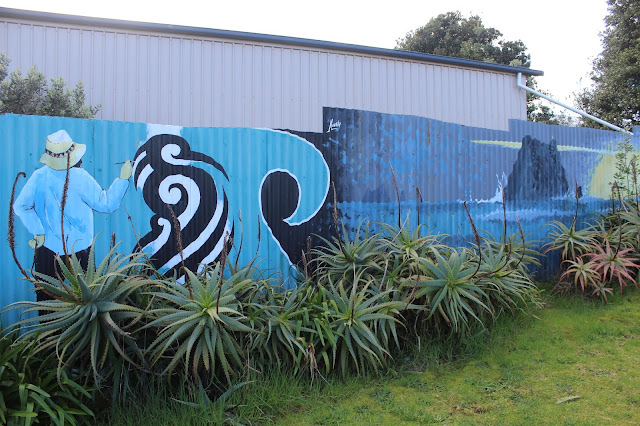 This mural sits on a long fence in the town I use to live in - Mangawhai. In Maori language it was named this as meaning "stream of the stingray" as the rays frequently swim in and out of the local estuary and harbour.  Pronounced as "manga" and "fie" with the "wh" being said as "f". I haven't been able to find out anymore about the artist of this mural except his name is "Marty" but having lived there for most of my life I can explain each portion.

From the far left is a person with a paintbrush painting what looks like a Maori art design - the town has alot of artists and an art gallery.  The next one is a rock which to locals is named "head rock" and is joined to the beach by a line of smaller rocks - people frequently go fishing from there. The last one is surf boards - the beach is very very popular with people who surf. There is a local company who teach people how to surf named "Aotearoa surf school and hire".
Linking up with Mural Monday.
By Amy at November 30, 2020
Email ThisBlogThis!Share to TwitterShare to FacebookShare to Pinterest
Labels: mangawhai, mangawhai murals, mural monday

...the blues in the first image are wonderful.

Another mighty mural. Thanks for explaining it all

A nice mural and I like all the blues, they blend in nicely.

That is a beautiful mural in an otherwise drab fence.

Lovely mural Amy and thanks for the explanation. Thanks for participating in Monday Murals

This is stunning. I love the step down aspect of the fence, too.

I love a mural that tells a story like this Amy 💜