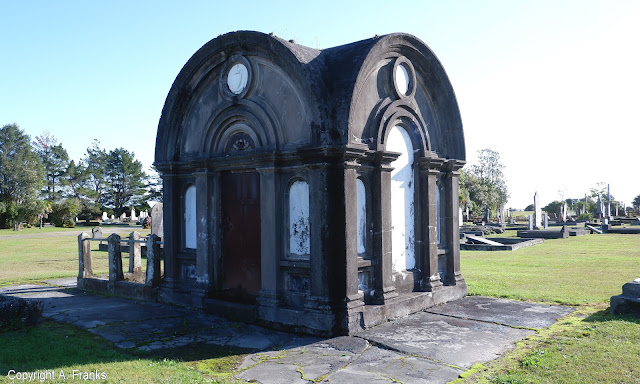 This was the first time I'd ever seen a mausoleum this size. It looks almost dark and forboding don't you think? I visited Hokitika Cemetery a few weeks ago on a sunny winter's day and have since found out that it was built for the infant sons of Thomas and Eliza Hungerford. Both babies were named Thomas Walter, one died in 1873 aged 18 months and the second died in 1874 aged 10 months. A local court bailiff named Thomas Christian who died in 1878 is also buried in there but not sure what connection he has to the family.

The mausoleum is a Heritage New Zealand listed category 2 structure.

Linking up with Through my lens, Ruby Tuesday, Tuesday Treasures, My corner of the world and Wordless Wednesday.

Interesting structure. Also interesting that both sons had the same name. You don't see that too often.

Could be the Bailiff fancied getting buried there

Oh that sad family!! I agree it really doesn't look like a happy final resting place for innocent babies. I wonder if the family tried again. Life was hard back then.

Such a sad story. In my family history I found instances of the same name being given to a second child after a first had died.

It does indeed look dark and foreboding.

Two comments really - 1. just goes to show the wealth of Hokitika in the gold rush years, and 2. why would you jinx your second child with the name of your poor departed first?

There were a couple of huge mausoleum buildings like that in the cemetery next to our house in Dunedin. They had been built to accommodate the remains of Chinese immigrants who had come over for the gold rush in Otago, so that their bones could be gathered up and returned to China to be laid to rest with their ancestors.

It certainly stands out, and makes one wonder. Grief can take weird expressions sometimes, though!

Not my idea of spending eternity!

From my recollections it's a very unusual structure for New Zealand.

This was quite common to name kids after the sibling that died. Half of Van Gogh's problems steamed from that, if you ask me. It's very sad...

Unusual to my eyes.

Wow. That's immense.
Thanks for sharing at https://image-in-ing.blogspot.com/2022/08/a-visit-to-cedar-creek-galleries.html

I have never really stopped anywhere along the west coast so your photos of the area are great to see.


Thanks for sharing your link at My Corner of the World this week!