Sunny day at the Whakamaru Dam 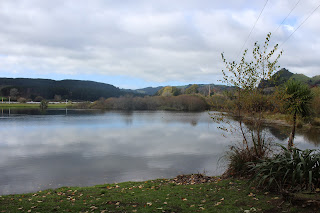 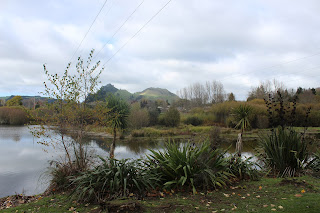 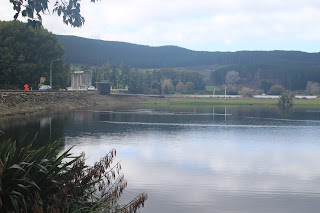 On our travels last weekend we stopped at a nearby lake and drove across the Whakamaru Dam. This baby is hydro-electric and owned by Mercury Energy.


It began being built in 1949 and took 3 years from start to finish. Power is sent from via 220 kv lines to the Bay of Plenty (where we live), Hawkes Bay, Manawatu and Hamilton.


Apparently there are some walking tracks around this area where people have sighted such birds as fantails, grey warblers, waxeyes and tuis.


The control center for the North Island of NZ was first established in 1964 and continued to operate until a replacement facility was found in Hamilton in 1992.

In 2013 a project was started to refurbish the turbines and generators. In 2016 the equipment arrived and was installed in 2017.

Along with ducks and swans this is a perfect place to fish for brown trout that average around 1.5kg.
By Amy at February 11, 2018
Email ThisBlogThis!Share to TwitterShare to FacebookShare to Pinterest
Labels: hydro electricity, mercury energy, new zealand, summer, waikato river, whakamaru dam

NZ has some of the best scenery in the world, wouldn't mind seeing it for myself one day.. beautiful cloud reflections Amy ✨

Recently you've been taking me around some areas I've never explored. I don't recall ever driving that stretch of SH32. Thank you.

Happy Week a head to you,
A ShutterBug Explores,
aka (A Creative Harbor)

The reflections and scenery is gorgeous. Very nice photos, Amy!

It's really cool that they added a walking path. We've done some of our best birding at power and utility facilities where they've added amenities like this.

such a pretty place to spend some time.

This is a pretty spot. The trout fishing sounds great.

seems like it turned out to be a good place. Beautiful as well. :)

The reflections and surrounding scenery are beautiful.

I love the reflections of the clouds on the water. So pretty.